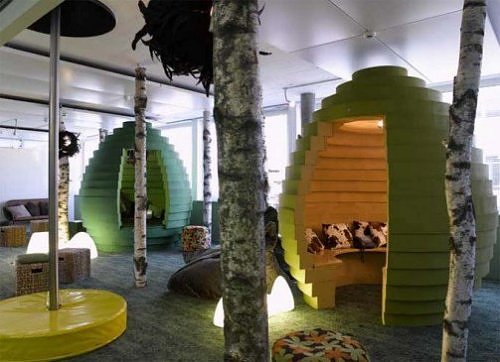 There are few jobs that don’t require at least a minimum amount of creativity. But how can employees think outside the box if they’re trapped inside one? Luckily, more and more companies across the globe realize that a creative mind sits in a creative office. We’ve found eight that have really gone ahead with giant steps and broken up office stereotypes, not to mention monotony. But see for yourself.

It’s probably no coincidence that our No. 1 is the office of a company where creativity is key – animation giant Pixar’s office is just cooler than cool. There’s an employee café, various lounges, a common room with games, a pool, a soccer field and a university where employees at all levels can learn as much about animation as they want to. 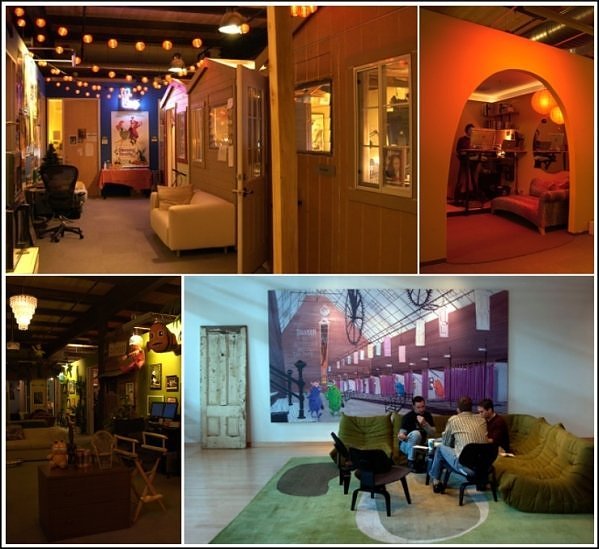 Instead of cubicles, many employees have opted for little houses (top left), while others have personalized their space further (top right); a typical lounge (bottom right) and more work spaces (bottom left).

Google’s offices have been featured before, but their office in Zurich is really something! Spread over five floors, it was designed by Camenzind Evolution after interviewing all 350 Google Zurich employees – or Zooglers as they are affectionately called – regarding their design preferences and office space needs. Here’s the outcome:

Every floor has a different theme – here obviously the Alps with hanging railway cabins: 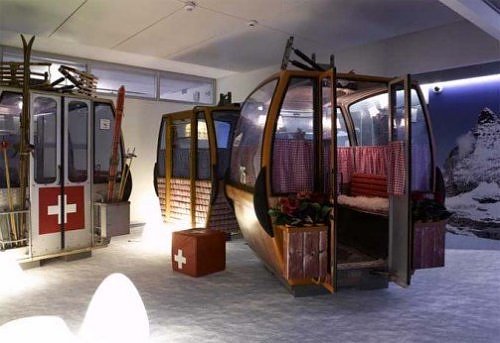 And probably the coolest feature – just pretend you’re in a fire station: 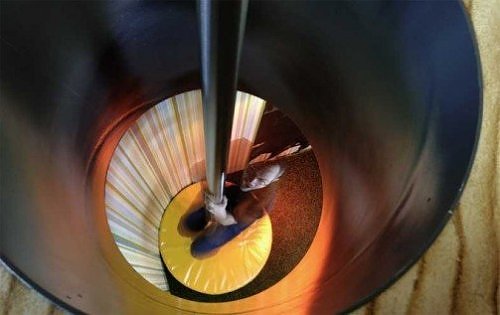 As the first interior design project ever, Ogilvy & Mather’s office in Guangzhouoffice received a prize at China’s third annual Most Successful Design Award in 2008. The office was designed by M Moser and Associates under the theme, “Carnival of Ideas”. A creative office like that will of course expect quite a creative output. But hey, no pressure!

Take a right at the merry-go-round: 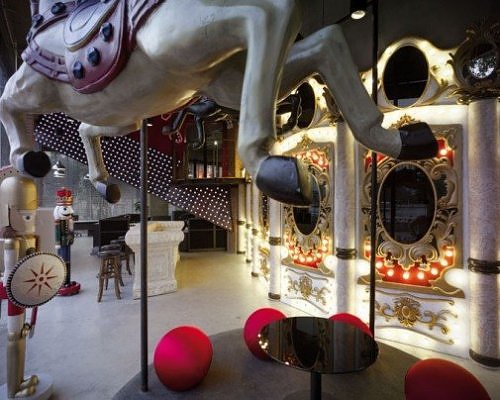 Not your average cubicled office: 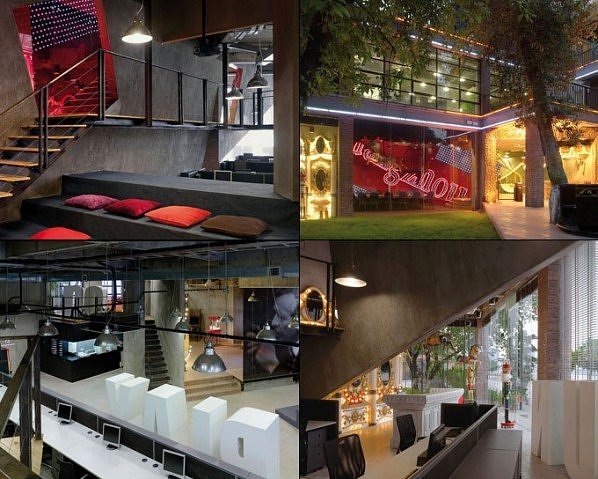 If Red Bull wanted to prove that all their energy-infused employees need an office to match their temperament, then their office in London was a full success. On three levels, design firm Jump-Studios (well, what else do you expect then) has created a dynamic, interactive space: Meeting rooms screaming in neon colors, conference tables that turn into ping pong tables and not to forget the slide that brings people from Level A to Level B. Get that adrenaline pumping! 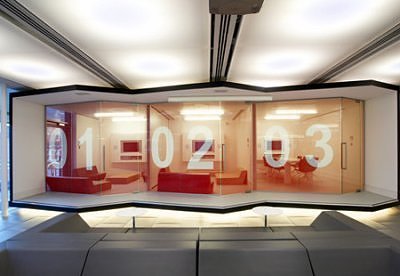 Weee, I’ll be early for the meeting! 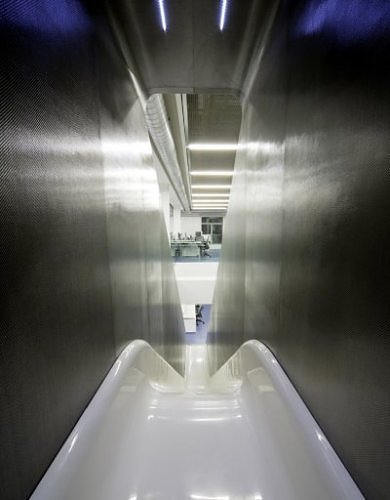 Why not play ping-pong while you’re having a meeting? 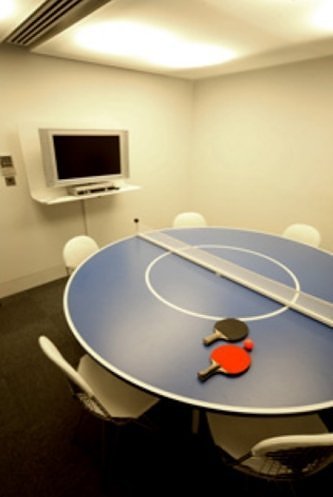 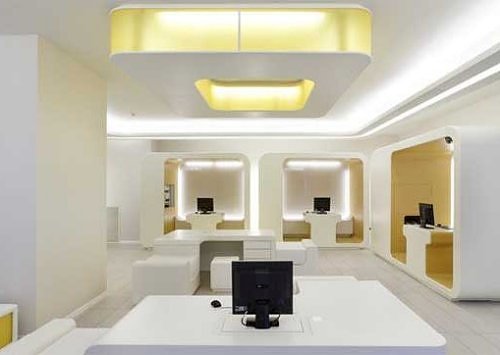 If you’re dreading going to the bank because of the stuffy atmosphere and long lines, you might consider visiting CheBanca! in Milan (well, Milan, what do you expect!). The branch was designed by Crea International to reflect the brand’s simplicity, transparency and innovation. If the transactions are indeed as smooth, simple and transparent as the design suggests, we’ll indeed say, “What a bank!” 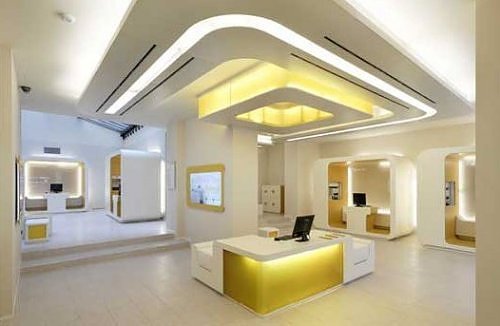 Turning nothing into something must’ve been the objective of Dutch designers Joost van Bleiswijk and Alrik Koudenburg when they created an office built entirely from cardboard. The idea behind the “no screw, no glue” approach was to create an office for the Amsterdam-based advertising agency, Nothing, that would turn the agency’s clients into brand ambassadors, using the most “nothing” (and environmentally friendly) building materials they could find. 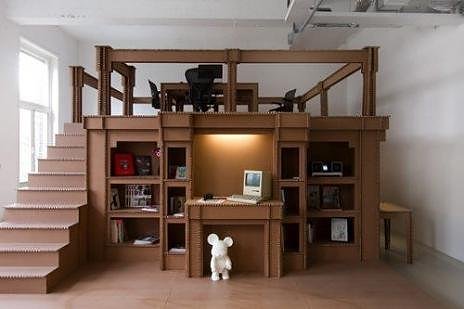 Visitors and clients are encouraged to leave their mark on the brown walls: 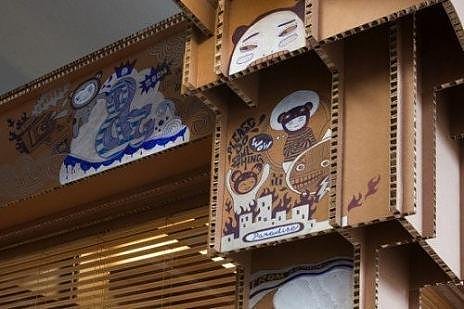 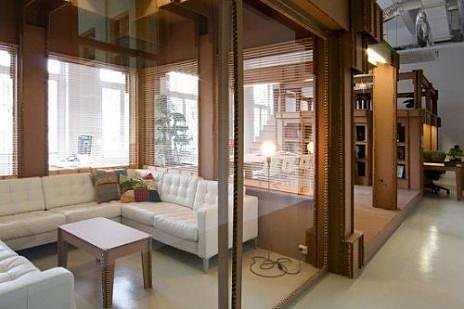 A plant might not be your average type of office (and we’re not talking about the green kind) but if it’s as cool as the VW Phaeton assembly plant in Dresden, Germany, one can’t wish but to work there. 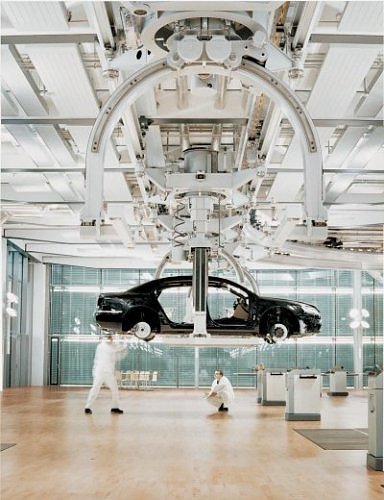 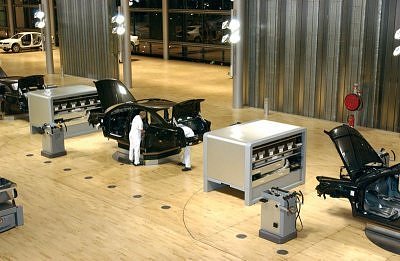 A design marvel also from the outside: 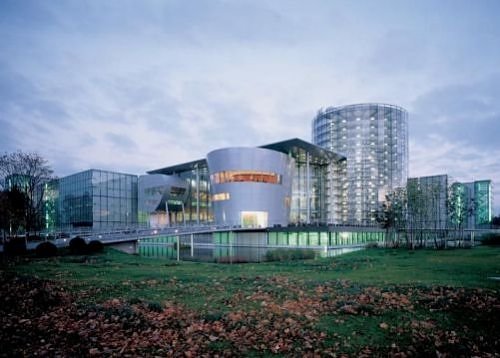 For people who like to work when on the move, our last office design, the limousine office, might be just right. Equipped with work desks, large comfortable chairs, floor and ceiling lights, two 7-inch screens, DVD, stereo and bar, you really feel like you’re in an office. Except for the bar part maybe. The good thing is, if you’re on your way to the airport, the interior looks so much like that of a plane, you wouldn’t really know the difference. If you’re flying First Class that is.

Is it a limousine or plane? 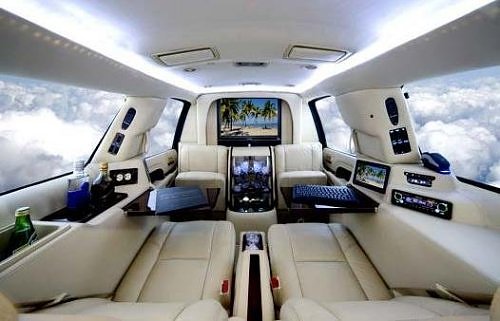 The luxury car office, brainchild of Limousines World, can be set up in a Cadillac Escalade, Mercedes GL, Lincoln Navigator, Infiniti QX56 or Ford Expedition.

Ah, now it looks a bit more like an office: 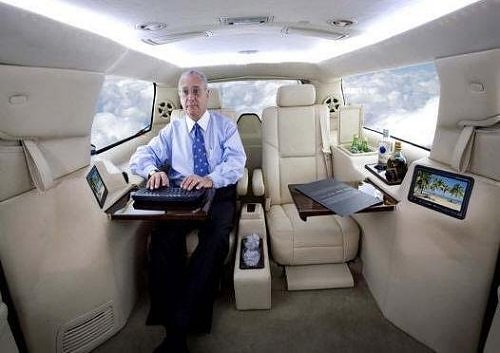