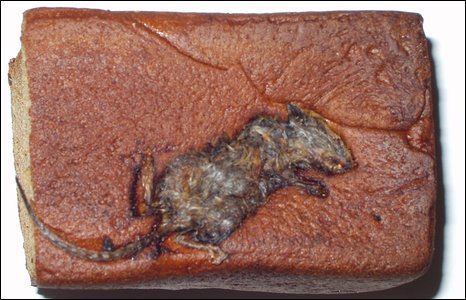 A man in Ballymoney, Ireland found a whole dead mouse inside a loaf of bread in late 2007. Now, a court has fined the bakery £1,000 plus additional fines. The BBC has more:

North Antrim Magistrates Court heard how a man purchased a Hyndman’s malt loaf from a supermarket in the Ballymoney area before Christmas 2007. When he unwrapped the loaf he discovered the small lifeless mammal embedded in the base of the bread. The judge fined the company, D Hyndman and Son Ltd, Maghera, £1,000 plus costs for placing unsafe food on the market.

The court heard that tins in which the bread is baked were oiled the night before they were filled with dough. Some time between the tins being sprayed and being filled, the mouse got into the tin, a prosecuting lawyer said.

“In fairness to the defendant they have engaged pest control services who regularly inspect the premises and did so before this incident,” she said.

The defence lawyer said an “onerous inspection” is held at the bakery every six weeks and that two field biologists attend each year. There are 131 bait stations in the premises at present, he said. Staff carry out daily inspections and two full-time cleaners are employed at the bakery who both work eight hours per day. In imposing the fine, the judge said he had considered public concern but also the steps taken by the company to ensure proper hygiene.