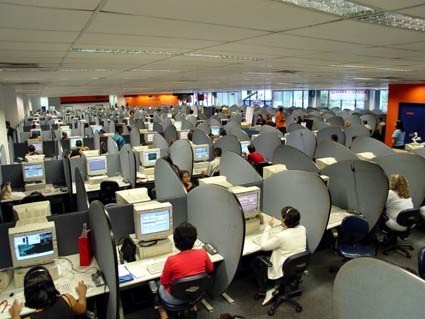 The other night while I was preparing dinner, a man with a heavy Indian accent called me. ‘Mike Johnson’ wanted to know if I needed satellite dish service.

Most people I know have become accustomed to making calls to or receiving calls from offshore call centers. We even joke about it. But while the way some companies would like us to believe their customer service or sales reps are just down the road is comical, the offshore call center business is huge. According to the American Chamber of Commerce in Egypt, the industry is bringing in revenue of over $76 billion. That’s a lot of dialing.

Egypt Emerges as an Outsourcing Destination

In 2008 the National Outsourcing Association named Egypt the Outsourcing Destination of the Year. The judges stated Egypt’s language skills, young population, and growing list of global sourcing investments as reasons for its win. The country is becoming an increasingly popular offshore destination for European companies and many multinational companies are taking a chance on Egypt’s new and improved business environment, including Vodafone, IBM, Microsoft, and Valeo.

Some of that business is call centers and Egypt is banking on more.

According to London-based research company Datamonitor, Egypt’s call center industry is growing at over 50% a year. So how did Egypt do it? Branding is a significant component. Egypt’s business and governmental leaders have been busy promoting the country as the place for offshore services. Among the benefits touted:

But none of the effort could amount to much without governmental support. Egypt’s initial success is due in large part to a government that understands the importance of the call center business. They’ve worked to provide an adequate regulatory framework, facilitated participation in international exhibitions, and created a system of accreditation.

What’s Egypt Got Over India?

The US accounts for well over half of offshore business clients. And the US relationship with India is established. While Egypt may capture some of that market, the focus is on European companies, where Egypt has a marked advantages over India. It’s only a three or four hour flight from most destinations in Europe, versus 18 or 19 hours of flying to get to India.

And then there’s the language. US customers have grown used to a thick foreign accent, as long as they speak our language. Europe is multi-lingual. Not only do Egyptians speak in a more neutral accent, they also have the educational infrastructure to offer services in Arabic, English, French, German, Spanish, Italian, Greek, Portuguese and Russian. This is a huge advantage for multilingual markets such as Europe. India primarily offers English.

If the title is any indication, Egypt has succeeded. The challenge now is to keep up with demand.