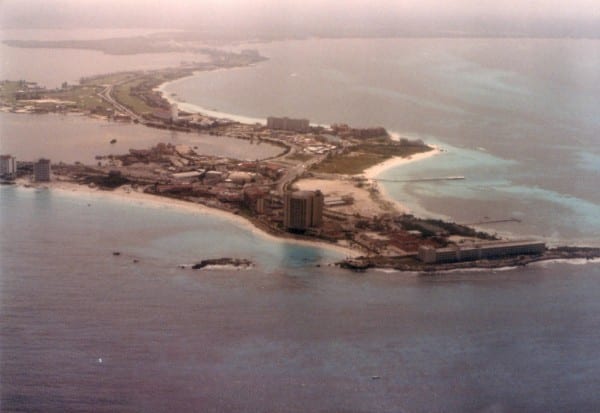 Eight people have died after someone threw petrol bombs into a bar in Cancun, a popular US tourist destination in Mexico. From the BBC:

This won’t be good for all those All Inclusive Resorts In Cancun.

The bar was set on fire early on Tuesday by unidentified assailants, prosecutor Francisco Alor Quesada told local media. Among the dead were several women working in the bar and two customers, he was quoted as saying in the Diario de Yucatan.

The bar had reportedly been subject to several attempts at extortion. The suspected attackers arrived at the bar in a black car and a truck, he added. An investigation is under way.

Tourism is Mexico’s “third-biggest source of dollar inflows after oil and remittances,” according to BusinessWeek:

Mexico’s international tourism fell for the first time in a decade last year amid a weak economy and a swine-flu scare, bringing in $11.3 billion compared with $13.3 billion in 2008. In Acapulco, 190 miles south of Mexico City on the Pacific coast, the number of spring breakers handled by (event company) StudentCity dropped 45 percent from last year. Cancun has fared better, with spring breakers traveling with StudentCity down 30 percent from a year ago, (event organizer Cristina) Ferraro said.

Drug-gang killings have left 2,049 dead this year, according to El Universal newspaper, a rate that would top last year’s total of more than 6,000. At least 110 people were killed last weekend, according to Reforma newspaper.

The State Department reported at least 77 homicides of U.S. citizens in Mexico last year. The agency’s online database doesn’t specify the circumstances of the killings or say whether the victims were involved in the drug trade.

But–*cough*–tourists and Americans could easily get in the way of one of those flying petrol bombs. It doesn’t matter who the war is with. The point is that Mexico’s violence is scaring away the people who provide one of its major sources of revenue. Mexico is basically saying “I can’t get my sh*t together.” That kind of situation doesn’t exactly attract the fun-in-the-sun crowd.

Oddly enough, Mexico seems to have exchanged roles with Colombia, the formerly violent country that now draws in a burgeoning number of tourists with natural scenery, friendly culture, and fascinating cities. Colombia’s drug violence is now mostly relegated to remote pockets. Heck, even Egypt, where bombers do target tourists, is probably safer than Mexico these days. After something happens, police clamp down hard, making it nearly impossible for anyone to sneak in a bomb, at least for a few months.

I’m not hearing about any of this kind of enforcement in Mexico. The government seems impotent, while the economy and citizens continue to suffer. It’s a shame.