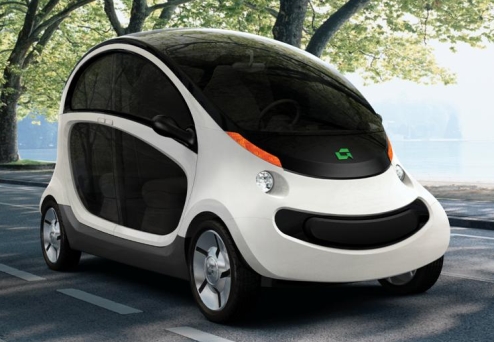 The prototype. See Wired article for most recent images.

Fast on the heels of GM’s P.U.M.A., Chrysler subsidiary GEM has released the Peapod, a $12,500 electric vehicle marketed at city commuters. Wired has more:

The long-awaited, often-advertised Peapod will be available for order on Earth Day, April 22.

(The) production version of the neighborhood electric vehicle resembles George Jetson’s Deux Chevaux. Company director and brand guru Peter E. Arnell, whose initials inspired the company’s name, told Treehugger.com the car’s appearance was inspired by “Japanese bullet trains, storm troopers from the film Star Wars, space helmets and turtles.” There’s also a very prominent “smile” to the car’s grill, but what else would you expect from a man whose firm devised Pepsi’s new logo with the Cheshire grin and laughably pretentious backstory?

The feel-good vibe continues with a glance at the in-dash iPod (sold seperately). Edmunds says every trip concludes with a carbon-footprint analysis, while another app tells you exactly how much money you’ve saved by leaving the family truckster at home.

The Peapod tops out as 25 mph as required by law for NEVs (neighborhood electric vehicles).

Oddly enough, you need an iPod or iPhone to start the car. Wired commenter Kelarius has a nice remark on the fact:

So that makes this over priced golf cart the worlds largest and most expensive iPod accessory?

I’m baffled by the recent insurgence of NEVs. I can see them being used in Europe, but America still has six-lane highways, suburbs, and SUVs to contend with. They’re also overpriced.

NEVs like the Peapod would work better in Masdar City than most US cities.