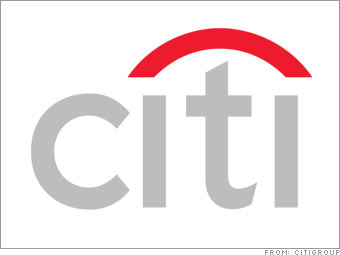 Lehman Bros. stockholders must be getting ready to file a class-action suite after this morning’s news (from MarketWatch):

Citigroup shares jumped by more than 50% Monday morning after the U.S. government agreed to rescue the nation’s once largest bank and the pioneer of the one-stop-shop for business and consumer financial services in an eleventh-hour, $326 billion plan to avoid financial collapse.
The government agreed to invest $20 billion in Citi and to guarantee as much as $306 billion of Citi’s troubled assets in a deal reached Sunday. The deal also gives the government control of executive bonuses, and limits dividend payments.

Citi’s shares jumped by more than 50% after the news.

WaMu no longer holds the dubious honor of being the biggest bank bailout in history. According to BusinessWeek,

At midyear—June 30, 2008—the Office of the Comptroller of the Currency says, Citi’s primary banking unit, Citibank NA, held $37.1 trillion in total notional value derivatives, including $3.6 trillion in credit default swaps. Those swaps in recent months have proven to be the most dangerous category.

The Bailout Soap Opera, Season 2 has begun. The Citi bailout is a good example of how not to bail out a bank. Rescuing banks takes precedence over other industries–including Detroit. But throwing money with minimal parameters at a bloated, inefficient ogre like Citigroup is a big mistake. The bailout is fine, the method stinks. Arnold Kling says it best:

Maintaining Citi as a zombie bank is not really constructive. I would feel better if it were carved up, with the viable pieces sold to other firms and the remainder wound down by government. In my view, getting the financial sector down to the right size ought to be done sooner, rather than later.

From my perspective, the whole TARP/bailout concept is misconceived. The priority should not be saving firms. The priority should be pruning the industry. Get rid of the weak firms, and make good on deposit insurance. Then let the remaining firms provide the lending that the economy needs.

Exactly! We need to think macro, focusing on aggregate results and industry health rather than investor relations–a concept that now refers to the government as the corporation, the public at large as investors, and the Dow as the index of government success–and pleasing well-connected banks. We have smart energy meters, Smart cars, and smart cards. Why are smart bailouts so difficult?