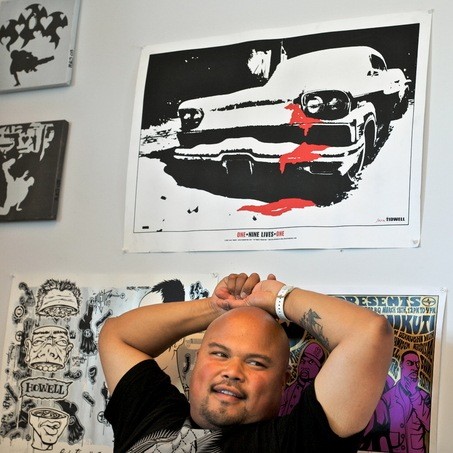 Judging from the photograph, what type of franchise would you say Leo Rivera has launched? A tattoo parlor? Auto shop? Art gallery? None of the above. Rivera is the brains behind Bishops Barbershop, the latest in a string of hair cutting companies that offer an alternative to high priced salons and low-end joints without a shadow of personality.

Walk into a high dollar hair salon and you might be offered a glass of wine to go with your $60 haircut. IF you have an appointment that is. Walk into a Bishops Barbershop on any given Tuesday (no appointment necessary) and suck down the suds during your $12 buzz cut.

Rivera didn’t invent the idea of a different kind of hair salon. The niche is includes SportsClips, which features TVs blaring ESPN and stylists in NASCAR gear. Then there’s Cartoon Cuts, where kids get hosed down by a nozzle that resembles an elephant trunk. But Rivera’s joint is different. Partly on account of that beer, and partly due to the street art he supports which creates the uber-urban vibe. But mostly it’s because of the personality Rivera has infused into his brand.

Rivera told Oregon Live there are already two other nationwide outfits that call themselves rock-n-roll barbershops. Rudy’s Barbershop and Floyd’s 99 Barbershop have a presence in many cities nationwide. Competition is fierce, but in a recession proof industry, Rivera’s not scared.

While franchising will allow Rivera to expand quickly, the personality that captured Portland, Oregon’s heart will have to be toned down. The trademark wall collages might not feature naked women anymore, but Rivera insists all stores will give away beer. He never wants to be another Supercuts.

Bishops debuted at the West Coast Franchise Expo on Nov. 7. Within five years, the company hopes to have franchises in 15 markets in the U.S. and Canada and, eventually, more than 200 stores.

Is real estate cheap yet? I may channel my inner street and buy one myself!