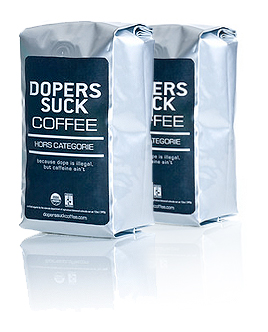 One way to be against doping: Dopers Suck coffee.

After four years of maintaining his innocence about doping charges that ruined his reputation and caused him to be stripped of his 2006 Tour de France title, the American cyclist Floyd Landis has sent e-mail messages to several cycling officials in the United States and in Europe in which he admits using performance-enhancing drugs for most of his career.

Two of those officials said that Landis’s messages provided a detailed description of doping that began in 2002, Landis’s first year alongside then-teammate Lance Armstrong. Both were riding for the successful but now-defunct United States Postal Service team.

Landis provided detailed information about his own doping practices, saying he consistently used the blood-booster EPO to increase his endurance, testosterone, human growth hormone and blood transfusions. He spent $90,000 a year on his doping regimen, he said.

Doping regimens were encouraged by some team officials, including Johan Bruyneel, the longtime Postal Service team manager and current head of Armstrong’s RadioShack team, Landis wrote…Landis said that Bruyneel, his team manager on the Postal Service team, introduced him to the use of steroid patches, blood doping and human growth hormone, according to officials who received the e-mail. Landis also said that in 2003, after breaking his hip, he had stored bags of blood in Armstrong’s apartment in Girona, Spain. He said that his blood was stored in a refrigerator, along with bags of blood belonging to Hincapie and Armstrong.

Landis, who went as far as to write a book and appear on Larry King Live claiming his innocence, said he had to clear his conscience, according to the Times.

I was lucky enough to be at the Tour de France in 2005. One thing I remember clearly was that although doping wasn’t openly talked about, it was known that everybody did it. Kind of like steroids in bodybuilding–everybody does it, it’s a known practice, but they deny it when publicly asked about it.

Anti-doping agencies spend God knows what enforcing doping laws every year, but it doesn’t seem to be doing much good. That’s true for many sports, not just cycling. What if we admitted to our enforcement failures, and just legalized and regulated everything? G. Pascal Zachary comments on that idea in Wired:

The Greeks had their gods and heroes. Twelfth-century Frenchmen celebrated dragon-slaying knights. We moderns have sports heroes. Friedrich Nietzsche explained it all in 1883: Every culture needs the uebermensch (“over-man”) to make lesser mortals – the rest of us – feel pride in our shared humanity.

…nature isn’t keeping up with the demand for superathletes. With the explosion of professional and Olympic sports, we now need squadrons of hyper-evolved stars. Predictably, science and technology have stepped in to fill this need with everything from designer steroids to beta-blockers. It’s time to face the obvious implication: Athletes should be permitted to use performance enhancers, so long as the users are monitored for safety.

…the sporting world must ultimately accept that the distinctions between doping and nutritional supplements, illegal enhancements and scientific training, no longer exist. Elite sports are already thoroughly enmeshed in a laboratory world of pharmaceuticals, medicine, and high tech nutrition. Any athlete who wants a banned drug can get it. And as we’ve seen repeatedly, designer drugs coevolve with tests, staying one step ahead of authorities and allowing savvy athletes to juice unnoticed.

Imagine a world where performance enhancement was open and regulated. Instead of forcing athletes to sneak through back alleys to stay competitive, sports authorities should admit that drugs are essential – then help athletes cope with the side effects. Once legalized, drug use would still have limits, but they would be established by physicians and athletes – based on their ability to handle performance enhancers. Bad outcomes would be far less frequent if players were not forced to rely on quacks (such as the former Tower of Power bassist at the center of the baseball designer steroid scandal). Innovation in performance enhancers would accelerate in the light of day. There might even be spinoff applications that would benefit you and me.

Zachary also suggests creating one league for doped-up athletes, and another for athletes who don’t dope. Given the massive amount of funds, time, and energy spent trying to regulate (and avoid charges of) doping, I think the idea of legalizing and regulating is seriously worth entertaining.