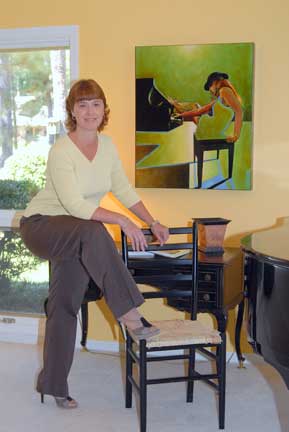 This is the fourth interview in our Fairfield Small Business Challenge series.

Diana Bourgeois helps women connect. Through Networking in High Heels, her women-only networking community, Diana creates a forum for women to master the art of networking well. Her program also empowers women through charity and mentorship.

So far, Diana has helped create Networking in High Heels chapters in 12 states, with more to come. In our interview, she shares some valuable insights on how to network right.

BP: Have you always been a natural networker, or have you mastered the art along the way?

That is definitely something that I want women to know, that I was very shy for a long time and I actually would not speak in class. I’m the person that nobody remembers from high school.

I had a mentor when I got out of college and started my first job. He taught me very quickly that networking was vital. You have to speak up and engage people. Most of all, you have to ask them for what you want, and you have to not be scared to hear no.

Once you overcome that feeling that somebody might say no to you, then it’s easy, because you just talk to anybody. I mean, I talk to people on the bus now, I talk to ladies in the bathroom–with discretion, of course. I have not been a networker in the past, and it is a very learned behavior. Any woman could become a very good, solid networker.

BP: How long does it take to get good at networking?

It doesn’t take long at all. I teach classes on elevator speeches and power networking to women. I can tell you that within a two-hour period, once they get it down, they’ve got it. So it doesn’t take long. That first time that you actually say something to somebody, and they say “no” or “I’m not interested,” after that, when you start again, you’ve got it.

The elevator speech is important, because you learn to gear yourself towards talking to somebody and not at them. A lot of people start out telling others all about what I do, “oh, let me tell you how wonderful I am,” and don’t see them. The elevator speech makes you comfortable enough to say “let me share with you what I can do for you,” and it also gets you to the point where, as a networker, you can say “I can hear no, I’ve got the self-confidence to feel like if I hear no I’m not going to go and break down somewhere.”

It’s definitely a step-by-step process, but you can do it pretty quickly as long as you establish your own comfort zone.

BP: What do you think the hardest part is of becoming good at networking?

I think the hardest part is getting out of what we have been taught by society as women. Society teaches us don’t talk to men, don’t ask them for things, don’t be that one that engages the conversation first. That’s really hard for women in business to overcome. To actually step up and initiate a conversation, especially if you’re walking up into a group of people, mixed company or just women, to feel like everybody in the group is already in the clique and you’re not, that’s really a hard thing to overcome.

BP: In my own experience, it’s been a lot easier to network informally, let’s say if a friend has a couple of friends who happen to be in my industry and we just start talking, that’s a lot easier than, say, going to a networking lunch at the Chamber of Commerce. Can you comment on that?

A lot of people have said that to me. One thing I would caution in that particular situation is that when you’re with friends, you tend to hang out with friends, so you don’t always make those connections that you’re there to make.

When you go to formalized networking meetings, I think that part of that is the realization that people are there to network. By going person to person to person, from the mindset of saying that people expect you to come up and talk to them and build a network and bond with them, then you go in the room thinking that very same thing: “I can do this because they expect it.” So if you walk in there thinking “I don’t know, they might be upset if I talk to them,” or something of that nature, then you’re not going to get the same results.

I always push people to not stay with the date that brought them. If you go with a bunch of girlfriends and you’re all standing there together, then it’s really hard to get away from that group and make those connections.

BP: Are there any mistakes that women tend to make in a networking in general?

I think the biggest mistake would be something like giving a business card and expecting someone to follow up and call you.

I always teach women to take a business card. You have the initiative, and that leads to control, which makes you feel empowered. So when somebody gives you a business card, and they say “call me,” then you have a better opportunity. If you give your business card, then that can end up on somebody’s desk, could hit the trash or wherever.

The second one is not following up. Whenever somebody meets you, even if they’re only showing a polite interest, they’re at least giving you the OK to share information with them.

Those would be the two big ones. The last one would be just waiting there for somebody to come and talk to you. If we all take the wallflower approach to being asked to prom…we’re not going to wait to be asked to prom, we’re going to walk up and say “I value myself, I value what I have to say, let me share that with you.”

BP: Do you have any tips on how women can get more quality leads, rather than just quantity, out of a high-volume event like a Chamber of Commerce luncheon or something?

I always say to people, “Is your networking not working?” because they always have that way of standing back, but when you engage somebody, when you ask them in what I would call a 10-second interview “What do you do? What are your services?” then you know if they fit what you are trying to share with them.

So, for example, if you’re a financial accountant and the person across from you is looking for a tax attorney, and you don’t do that, but you know somebody that does, that’s not a fit for you. But referring them is a great fit for you because you’ve all of a sudden made a contact, and that warms them to you, it makes them remember you. That’s the first thing.

The second thing is, whenever you do get that “A-ha” that they can use your services, tailor your elevator speech to them in what you’re going to say.

The biggest mistake I think a lot of women make in their elevator speech is that they just have one. You have to learn to tailor it. It’s like giving the same business card over and over again. What if you could change your business card to fit that person in front of you, so that the person in front of you realizes that your a 90-100% match for them, then that’s what that elevator speech is. It’s a warm business card, it’s a human touch that allows them to say “Oh! This person’s a 90% match for me.” That’s how you warm up that lead ahead of time, so that you get better quality instead of quantity.

That’s the bad thing about networking, is that everyone thinks “Oh, I’ve got 50 business cards, that’s a success.” Sometimes it’s just a matter of changing a few words in the elevator speech so that it really addresses that person in front of you.