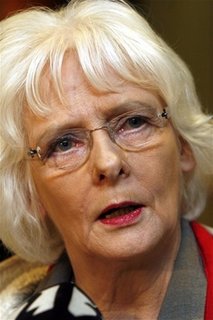 It’s interesting that moral quibbles take a backseat to perceived leadership efficacy when economic times get hard. Remember the Clinton years, which happened to be boom years, and the womanizing controversy? Running an impeachment trial on purely moral grounds seems like distant history in light of today’s economic crisis. Now, Iceland, one of the worst-hit countries of all, has elected a gay female prime minister. Her sexual orientation is secondary to what people think she can do for the economy. Feminist.org reports:

Sigurdardottir is currently the only openly gay national leader in the world. Also, according to the Associated Press, Sigurdardottir’s Cabinet is the first in Iceland to be balanced evenly by gender.

The international gay community has lauded Sigurdardottir’s appointment, but the Icelandic media is focused primarily on how the new prime minister will repair the economy. In a televised appearance Sunday, Sigurdardottir said “We’ve put together an agenda I hope will be enough to heal the discord in society and facilitate reconciliation….We live in difficult times and need to restructure the Icelandic economy and adopt new values,” according to the Calgary Herald.

Iceland has some of the most progressive gay rights legislation in the world and legalized gay marriage in 1996.