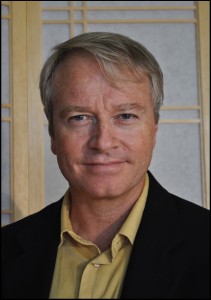 This election season, it’s time for … evolution? It is if you’re Steve McIntosh, founder and President of Now & Zen, Inc., no time is better than the present for making serious changes in the way we interact with the world around us. The former lawyer and corporate executive is best known for his Zen alarm clocks, geared at naturally easing you into wakefulness rather than traumatically beeping you into another workday. McIntosh’s latest venture is more philosophically oriented. He is a founding partner of the Institute for Cultural Evolution, which applies a new concept of evolution to the world’s most challenging issues. He is also author of the book Evolution’s Purpose. I caught up with Steve to learn more about his philosophies, and how he plans to enable real change.

Tell me a little bit about Now & Zen. You created an alarm clock that essentially wakes you up naturally and slowly, right? What need does it fulfill within consumers? Did you expect the clocks to be as popular as they were?

On one level, the Zen Alarm Clock provides a gentle wake up experience. It’s an aesthetically sophisticated alarm clock made from wood with an acoustic chime that replaces the common harsh plastic alarm clock. The Zen Clock allows people to actually look forward to the alarm going off in the morning.

On other levels, the Zen Alarm Clock is a decorative accessory for the bedroom that expresses the sensibilities of progressive spiritual culture. When I invented and designed the original clock in the mid-nineties, I wanted the clock’s design to reflect the aesthetics of the era, just as the Tiffany lamp expressed the art nouveau aesthetic while still being an appliance.

When I founded the company I had a strong business intuition about the demand for the Zen Alarm Clock, and we did some early focus groups that supported this. As we were developing it everyone thought it was a great idea. But it was not until we started selling it at retail that its “legs” were confirmed. It was so successful that our biggest problem in the first few years was making them fast enough. Now after 17 years as the President of Now & Zen, I’m pursuing a new career as a leader in the integral philosophy movement. This emerging form of philosophy provides the expanded perspective that is behind both my books and the new think tank I’m co-
founding, the Institute for Cultural Evolution.

It sounds like you’re interested in changing our culture so that we care more about “bigger-than-self” problems. It could be that you’re fighting a big fight here, as billions of dollars are poured each year into a system that makes us a) feel like selfish need- fulfillment is the primary road towards contentment, and b) is constantly creating new needs. How will you angle your campaign so that people, in their ever-distracted and self-absorbed states, will actually listen?

Consumerism is one of the primary values and pursuits of mainstream modernism. And a lot of progressives, especially environmentalists, vilify consumerism as the cause of many of our problems. However, the new evolutionary perspective that I represent better respects the achievements of modernism and understands that a strong and growing consumer economy is important for cultural evolution to move forward globally.

So our approach to problems like climate change is not to contribute to the current polarity, which falsely characterizes modernism as simply selfish and progressive postmodernism as the only form of culture that is compassionately concerned for the whole. Rather, we want to help environmentalists better appreciate how their deep-rooted anti-modernism threatens the very people they need to
persuade.

The first focus of our campaign is thus to help postmodernists better appreciate how they depend on healthy forms of modernist culture as a foundation for their own progressive position. Once we have helped move postmodern opinions forward in history we can then help plant a sound bite into mainstream culture about “the changing face of the environmental movement.” We want to reduce the polarity between modernism and postmodernism by helping postmodernists move from the position of “antithesis” to “synthesis” with respect to our mainstream society.

New York Times columnist Thomas Friedman has been arguing for years the “green should be the new red, white and blue.” But despite his admonitions the mainstream still does not trust postmodernists in general, and environmentalists in particular, to appropriately balance the interests of our global economy with protection of the environment. While the challenges are real, an important part of the solution is to overcome the underlying cultural polarity that is preventing the agreements required to make progress. This will be the focus of our work with the new Institute for Cultural Evolution think tank.

Integral philosophy shows us how opportunities for evolution exist where people have problems they cannot solve. So our initial focus will be on environmentalists who have the problem of not being able to produce adequate motivation in the electorate to respond to the crisis. We believe we can use the problem of climate change apathy to help evolve the environmental movement in particular, and postmodern culture in general. And evolution within this 20% segment of the American population will result in turn in the incremental evolution of the larger society. So we are targeting reachable demographic segments to activate the “pressure points” that can lead to cultural evolution overall. 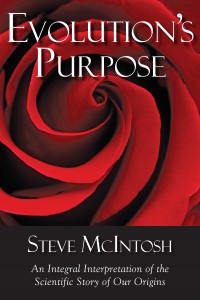 My inner cynic says that it’s too late to make the world a better place. We’ve hit the tipping point towards the extinction of our species and many others, and the best we can hope for at this point is to preserve what’s left for as long as we can. Can you counter me or give me a better outcome?

Our current cultural discourse is flooded with well-intentioned doomsayers trying to motivate political will for action on climate change. And at this point we know the planet is getting warmer and that ecological disruption is ahead. However, scolding and doomsaying has proven to be an ineffective strategy, so those of us who can clearly see the challenge have a responsibility to try a different strategy to build the necessary political will to respond to the threat and adapt to the changing conditions. Again, our strategy is to help bring about cultural evolution. While this will not solve the problem quickly or completely, the speed of change depends partially on the severity of life conditions—as things get worse cultural evolution will either accelerate or regress. We are thus working to create conditions that will foster a positive evolutionary response to the looming environmental crisis. In our Campaign Plan for Climate Change Amelioration we spell out detailed strategies and practical tactics to achieve this end.

So we are very concerned but we believe that an important element of the correct response to the crisis is the moral courage not to give up hope. Despite the ongoing presence of tremendous trouble and suffering in our world, and despite the inevitable setbacks and crises that lay ahead, integral philosophy’s understanding of evolutionary progress in both history and nature can renew our confidence that the human condition can be, and most likely will be, gradually improved over time.

How will the advances you make in your think tank affect the general population?

We will work to move the cultural demographic segments of both modernism and postmodernism forward in history by bringing them closer together— by demonstrating the power of a synthetic perspective that transcends the conflicts while including the best of both of these worldview structures. This is not “political centrism,” which has clearly failed; it is a new evolutionary perspective that provides the ability to evaluate more effectively and inclusively. Like previous forms of emergent culture, the evolutionary perspective begins with a relatively small critical mass. Its first affects are experienced only by those on the leading edge of culture. But over time the larger culture assimilates some of the advances and the center of gravity of the whole moves forward incrementally. For example, we can see how the cultural emergence of the sixties was partially assimilated by the larger developed world during the seventies, as new freedoms and more inclusive cultural mores took hold.

Cultural evolution is always uneven and we are not anticipating a “great awakening.” However, we do believe that the emergence of the evolutionary worldview can be compared to the original emergence of the modernist worldview during the European Enlightenment, and we hope that this new way of thinking and valuing will eventually amount to a kind of “Second Enlightenment.” Much of this thinking is explained in my new book: Evolution’s Purpose: An Integral Interpretation of the Scientific Story of Our Origins. For more information please visit my website: www.stevemcintosh.com and/or the website of the Institute for Cultural Evolution:
www.culturalevolution.org.