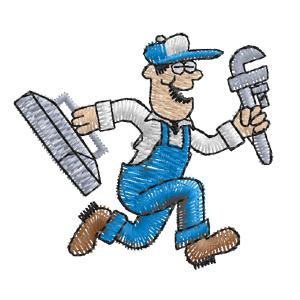 Joe the Plumber is doing darn well for a guy from Main Street. While everyone else loses money, Joe is worried about being taxed as a “rich” person.

Joe was John McCain’s new poster child for the all-American small business owner last night. A plumber from Ohio (or a non-Ohio voter planted by Karl Rove? You decide.*), Joe wants to start a small business that will put him in the $250,000+ income bracket.

This makes him a fine symbol of Main Street America for the GOP campaign. Here’s a blue-collar worker who wrenched and puttied his way to a quarter of a million dollar annual income, and he shouldn’t be taxed–

How Do They Make So Much Money?

The US Bureau of Labor Statistics says that on average, people in the plumbing profession (which includes a variety of gigs) make about $20/hour. I have never had a plumber charge less than $75/hour.

It also says that 30% of plumbers belong to unions. I wouldn’t be surprised if Joe the Plumber is a socialist union member who also doesn’t want to be taxed, thus enjoying the best of both worlds.

But again, the point is that these guys make bank. A small portion of blue collar work offers better pay and perks than your average middle management gig. Politicians–and their fans–need to think about what “blue collar” means when supposed Main Street citizens, who we assume are broke like the rest of us, pop up on TV screens.

Here are a few additional examples of blue collar gigs that earn workers more than many office gigs (again, from the BLS):

Politicians want people to focus on what Joe does, not how much money he makes doing it. He’s a hard-working American guy who just happens to want to start his own business in a fair way. And who happens to be estimating neat profits of $250,000/year.

How many of us can claim that for ourselves?

-He is not a licensed plumber.
-He doesn’t want to start the business himself, from scratch. He wants to buy it from someone else.
-He doesn’t make much money now, meaning he’d save more in taxes under Obama’s plan than McCain’s.