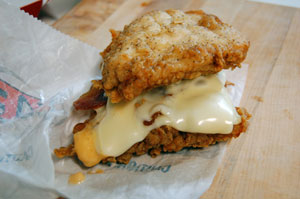 Kentucky Fried Chicken (KFC) has introduced a new “double down” sandwich that uses fried chicken fillets in place of bread buns. The Chicago Sun-Times has more:

Between the finger-lickin’ pieces of chicken are two slices of bacon, melted slices of swiss and pepper jack cheese and a dollop of “the Colonel’s sauce.” It’s been dubbed the “Double Down,” and “It’s so much 100 percent premium chicken, we didn’t have room for a bun,” according to a KFC commercial posted on YouTube.

The Colonel is test marketing these calorie bombs only in Providence, R.I., and Omaha, Neb. They’re $6.99 (not including airfare) for a value meal including fries and a drink.

The calorie count has yet to be posted on KFC’s Web site. But an independent analysis by the Vancouver Sun (yet another example of Canadians looking down on Americans) estimates the Double Down has 1,228 calories.

To put that into perspective, that’s almost 300 calories more than a Wendy’s Triple with Everything.

KFC may need to introduce a new desert to follow the “Double Down.” The “Keep it Down” should include at least three Alka-Seltzers, and possibly a Lipitor pill to boot.