In a drama worthy of a Hollywood movie, Brazilian-run beer giant InBev has purchased American icon Anheuser Busch for a cool $52 billion, according to the New York Times.

The multifaceted saga embroiled major players from Warren Buffett to John McCain (NotionsCapital refers to Cindy Lou McCain as the “Anheuser Busch Princess of Phoenix”). The themes are familiar:

–The sellout of an American dynasty.
–Big suitcases full of cash make corporate boardroom inhabitants act like angry five-year-olds.
–Prodigal son tries to make good but sacrifices his family identity in return (just like the Weather Channel).
–America’s economic stagnation partitions her out to rising giants like Brazil.

The thing that really caught my eye about this story was a minor detail. InBev execs only offered Anheuser Busch two seats on its 14-seat Board of Directors. Four seats are taken up by founding family representatives for Interbrew; four are for representatives for AmBev’s founders (InBev is the result of a merger between AmBev and Interbrew). The other four directors are independent.

Chairman of the Board Peter Harf is German. The rest of the board contains two Dutchmen, and several Brazilians and Belgians. InBev has been around for four years now, but its predecessors date back much further. In many ways, InBev is a Belg-Brazilian good ol’ boys club.

Note that none are American. Anheuser Busch, and August Busch IV, are nothing but American.

Picture the boardroom, full of Prada-footed InBev strategists. In walks August Busch IV, fifth-generation heir to the AB dynasty and Director/CEO/Chairman of the Board of Anheuser Busch. Like another famous Bush, Busch IV’s history as a fortunate son is a mystifying combination of ground-up work, privilege, and narrow escapes from the law.

The mainstays of his reputation are grounded in his incessant partying and advertising skill. In particular, he’s known for revamping the Bud brand in the 1990s (remember the Bud-Wei-Ser frogs?). AB’s advertising machine fuels its success. The New York Times says it’s the Super Bowl’s biggest ad buyer. It also put up brilliant TV spots that masculinized Bud Light—not an easy task, as beverage industry ad experts don’t often use “man” and “light” in the same sentence.

He also gets free Bud at work and sports a perma-tan. 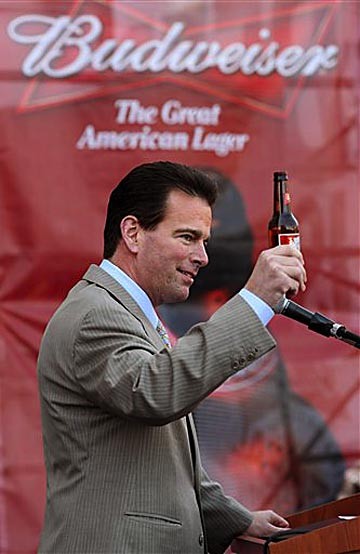 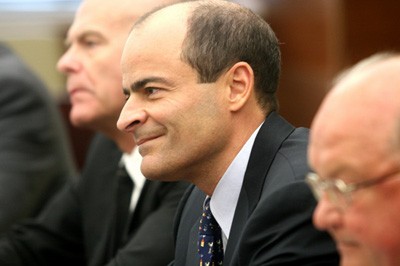 This can only lead to an awkward situation. Hopefully not as awkward as this American/European executive situation: 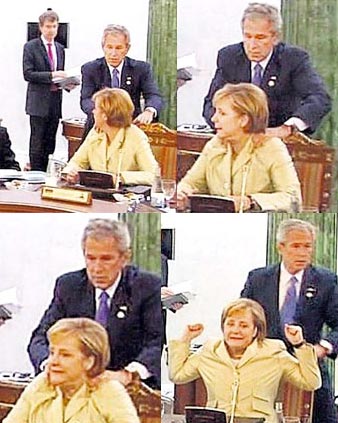 Busch IV was against the merger from the outset. Before InBev’s bid came to the table in April, Busch IV told distributors that no sale would happen “on my watch.” Unfortunately for Busch, AB only holds a small fraction of company stock. Major shareholders, such as Warren Buffett, spoke out against him, paving the way for the InBev merger.

According to the Wall Street Journal, Busch IV then tried to buy a 50% stake in Mexico’s Groupo Modelo SA, of which it already owns half. This move may have made AB too expensive for InBev. The talks eventually collapsed.

More recently, the takeover grew hostile. InBev tried to forcibly oust AB’s Board of Directors. Anheuser, in turn, sued InBev for lying about its lending promises.

Then, InBev put up the offer nobody could refuse. $52 billion for the whole AB shebang (media outlets differ on the actual number. This is the New York Times/Ass. Press amount). Major shareholders jumped at the offer, leaving Busch IV no choice but to accept.

The partyboy, heir, and advertising dynamo now finds himself in a tizzy he never could have foreseen: Dealing with an established Euro-Brazilian club looking to take over international beer markets with the biggest beer conglomerate in the world.

Busch IV has a few consequences to deal with aside from sideways glances from his InBev counterparts.
From the NYT:

The deal caps Anheuser’s roughly 150 years of independence and will create a global juggernaut. The new company will have net sales of about $36 billion a year, followed in size by London’s SABMiller PLC. The two companies have about 300 brands, including Anheuser’s Budweiser and Bud Light and InBev’s Stella Artois and Beck’s.

The shift is likely to result in a leaner industry with fewer employees, but consumers probably won’t benefit from the price wars they have enjoyed in the past. (In late June,) Anheuser Busch (will) cut 10% to 15% of its workforce through early retirement and attrition.

Analysts interpret that to mean tchau, marketing people. Busch IV, unseated from his AB throne, can only stand by and watch as Milo’s Belg-Brazilian contingent uproots his pet advertising machine. The analysts have a point: In a duopolistic industry, who needs a big advertising budget?

I venture another prediction. Busch IV will come in kicking and screaming. The Belg-Brazilians, with their combined spirits of well-preparedness and a penchant for good parties, will produce a large cooler full of Becks to calm Busch IV’s nerves. As the group shares beer, Brito and Busch IV will discover a newfound synchronicity. They will agree to funnel AB’s marketing genius into untapped InBev niche markets, such as Lhasa and Abu Dhabi.

“I’m sorry I attempted to oust you from Anheuser Bush’s board, August.”
“And I’m sorry I sued you, Carlos.”
“Let’s go to the bar and have a Hamm’s.”

I cannot think of a better reason to pop the top off a Blue Paddle (yes, that’s shameless promotion of a product I love) and toast to another unwinding boardroom saga.