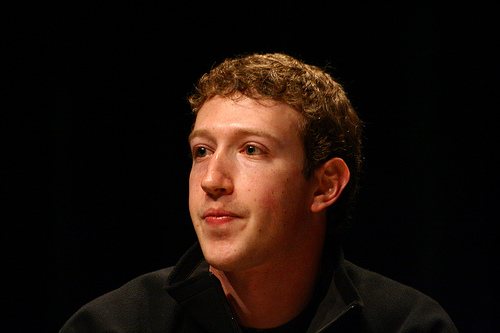 According to Forbes’ latest list of the 400 richest people in America, Facebook founder Mark Zuckerberg is now richer than Steve Jobs, Rupert Murdoch or Charles Schwab. The list, which ironically came out around the time Facebook went down today, estimated Zuckerberg’s worth at $6.9 billion. Jobs is worth a meager $6.1. From The Guardian:

the rise of 26-year-old Facebook boss Mark Zuckerberg appears to be unstoppable. Yesterday it was revealed that his wealth has tripled in a year, making him richer than the mighty Rupert Murdoch and even Apple’s Steve Jobs.

A ranking of America’s wealthiest individuals by Forbes magazine estimates Zuckerberg’s current fortune at $6.9bn, up by $4.9bn in a year. He’s still only 35th in the rankings, but he’s rising up the list faster than anyone else. And in a sign that the young social networking tycoon is attempting to take control of his rocketing public profile – and perhaps even the responsibility that comes with it – Zuckerberg will appear on Oprah today to announce a $100m personal gift to urban schools in the city of Newark.

…Forbes is saying that Mark Zuckerberg is worth more than the guy who brought the world enormously successful products such as the iPod, iPhone and iPad. This for a guy whose company may not yet even be generating actual profits.

Forbes has been doing these lists for a long time and has a serious methodology to evaluate every aspect of wealth, including executives at privately held companies. The magazine says it even looks at debt and notes in its methodology explanation that “Some on our list will become richer or poorer within weeks — even days — of publication.”

It also says that privately held companies are evaluated by comparisons with similar public companies. In Facebook’s case, there isn’t really a direct public comparison, so perhaps Forbes is basing its valuation on the secondary market, where some employees and investors have sold their Facebook stakes, and stakes of investors like Microsoft Corp.

Yes, Zuckerberg appears to have become wealthy, at least on paper….But until Facebook becomes a publicly traded company, guessing at Zuckerberg’s wealth seems like a meaningless exercise.

Amen to that. But it sure makes for a good headline, doesn’t it?