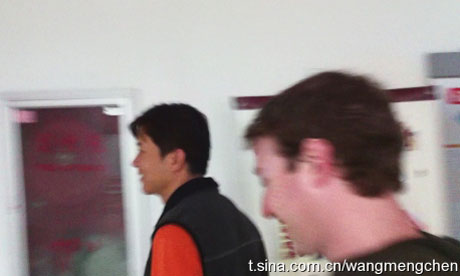 This photo was taken and leaked by a Baidu employee.

Facebook’s Mark Zuckerberg paid a visit to Beijing to talk to Robin Li, who runs Baidu, China’s biggest search engine. As much as Zuckerberg would love for Facebook to penetrate China, he, like many others before him, first needs to build the kinds of relationships that will let his software penetrate the so-called Great Firewall. From the Guardian:

Zuckerberg appears to have found common ground with Li, an internet entrepreneur who has completed a postgraduate course in the US….Since then, he has shrugged off Google and Yahoo, as well as criticism about a supposedly weak stance on censorship and copyright piracy, to make Baidu the dominant force in the Chinese search engine market. In an earlier interview with the Guardian, Li said Baidu would one day become an international rival to Microsoft and Google.

Given the furore over censorship that followed Google’s decision to curtail its Chinese search engine earlier this year, it is unlikely Facebook and Baidu would like to draw further attention to the issue.

China already has two social networks that are Facebook imitators: Kaixin, with 80 million users, and Renren, with 150 million. These lack the economic clout and global reach of Zuckerberg’s company but they do have the advantages of language and cultural awareness, as well as the protection of the Great Firewall….To tackle them and other big Chinese platforms, such as QQ, Facebook would probably have to move inside the firewall and accept greater censorship.

Facebook would tap a market of 1.3 billion users in China, according to Mashable. Zuckerberg is chomping at the bit to get in, just like everybody else. Since China is notoriously hard to get into for online companies, a Facebook allowance could pave the way for other social media companies, too. How likely that is to happen is a different question.