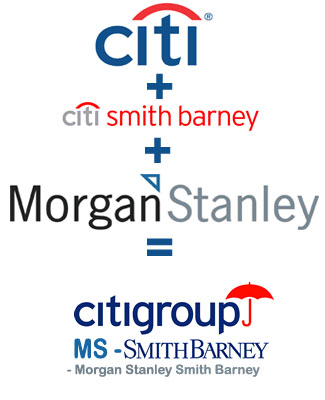 Morgan Stanley and Smith Barney sealed a $2.75 billion joint venture today, creating the biggest team of financial advisors in the US. Bloomberg reports:

Morgan Stanley is paying $214.2 million for Citigroup’s managed futures business, subject to government and other approvals, according to a regulatory filing today. Citigroup, which received $45 billion of government aid, estimates it will recognize a gain of about $6.6 billion from the deal, higher than its original estimate of $5.8 billion.

Citigroup, the third-biggest U.S. bank by assets, and Morgan Stanley, the sixth-largest, agreed in January to create the venture to compete against Bank of America Corp., after its purchase of Merrill Lynch & Co., and Wells Fargo & Co., which took over Wachovia Corp.

The Wall Street Journal put together a customer Q&A for the merger, worth reading if you’re wondering about your stock or accounts.