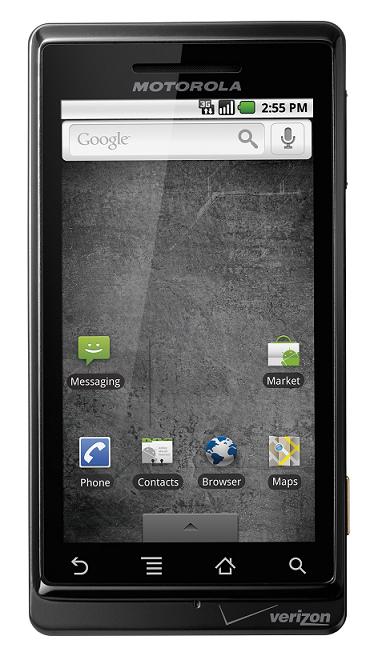 Motorola launched its first Android-based smartphone, the Droid, today. It will cost $199 with a 2-year contract and $100 mail rebate. PC Magazine has more:

…the Droid is a large, slim (0.5-inch thick) phone with a 3.7-inch, 854-by-480 capacitive touch screen and a sliding keyboard. It has a built-in 5-megapixel camera, DVD-quality video recording, and Wi-Fi, and it makes calls on the Verizon Wireless network.

The Droid is also the first phone to come with Google Maps Navigation Beta, which offers free, spoken turn-by-turn driving directions based on the Google Maps engine.

As an Android 2.0 phone, the Droid automatically syncs with Microsoft Exchange and has an improved Web browser compared to other Android phones. The browser supports HTML5 and double-tapping to zoom.

Verizon is currently saturating airwaves with commercials for the Droid, which will hit shelves by the end of October. The iDroid commercial campaign takes direct aim at the Apple iPhone – in the TV spots, the Droid is lauded for having a sleeker interface, a full QWERTY keyboard, and more versatility than the iPhone.

Wonder how many consumers will say “iWant one”?