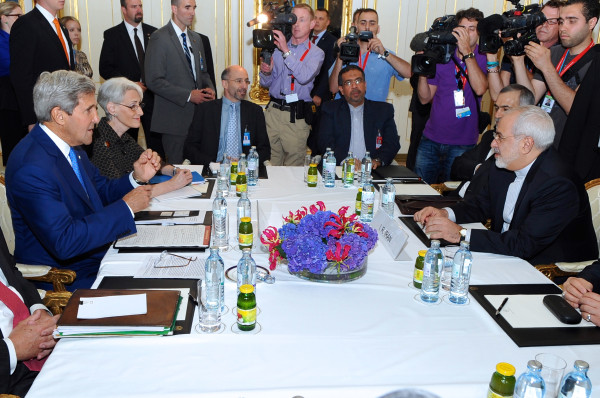 Today’s announcement of a deal limiting Iran’s nuclear program also will lift many, if not all, of the crippling economic sanctions that the West has levied over the years. While inhibiting the Islamic Republic’s ability to develop a nuclear weapon was the goal of the P5+1 nations (the U.N. Security Council – the United States, Britain, France, Russia, China – and Germany), Iran has been desperate to free its economy from the shackles those countries have imposed.

The breakthrough comes after nearly two years of negotiations and eighteen straight days of discussion in Vienna. Under the terms of the deal, Iran would need to reduce its existing stockpile by about 98 percent and would be barred from enriching uranium for ten years. The agreement would also keep in place conventional arms embargoes that became a point of contention in recent days.

“I believe this is a historic moment,” Iranian Foreign Minister Mohammad Javad Zarif said on Tuesday. “We are reaching an agreement that is not perfect for anybody but is what we could accomplish. Today could have been the end of hope, but now we are starting a new chapter of hope.”

President Obama, meanwhile, spoke at the White House Tuesday morning to announce the agreement and encourage Congress to give its assent.

Quite a bit of controversy has surrounded these talks, which have been ongoing since an interim deal was reached in late 2013. Many in the U.S. are critical of the Obama administration’s apparent drive to achieve a legacy accomplishment at the expense of some key concessions. Tehran has its own hardliners, many of whom view Iranian concessions as a national affront.

But politicians on both sides involved in the negotiations were well-aware that failure would mean prolonging an untenable situation. For the P5+1, that would mean a dangerous Iran with the potential to go nuclear and destabilize an already-tense region in the Middle East. And for Iran, that meant economic pain that could threaten the regime’s very legitimacy.

So a deal was reached. Concessions were made. And Iranians are already celebrating – or preparing to celebrate – the lifting of sanctions. But what exactly will that mean?

Iran has been the target of sanctions by the U.S. and other countries ever since the Revolution of 1979 created the Islamic Republic. As concerns over Iran’s nascent nuclear program increased over the past fifteen years, the United Nations has stepped in with sanctions meant to prevent the country’s uranium enrichment.

Those sanctions, particularly more recent ones related to the nuclear program and human rights abuses, have bit hard into the Iranian economy. Following sanctions imposed in 2011 and 2012 by the U.S. and E.U., Iran’s oil exports dropped by almost half within three years according to the U.S. Energy Information Administration

SEE ALSO:
How Inflation and Car Insurance is Impacting Customers

The U.S. has turned to other methods as well. President Barack Obama ordered the use of a computer worm to cripple Iran’s Natanz enrichment facility. That worm would inadvertently spread and come to be known as Stuxnet.

What will the economic effects of lifting sanctions be?

Oil prices have already dipped in the past day as a deal became increasingly likely. According to the New York Times, Brent crude futures stood at $56.94 during Tuesday morning trading in London, dropping 1.6%, while West Texas Intermediate crude fell to $51.29.

Iran’s energy industry would likely get a big boost from the lifting of sanctions, putting downward pressure on already-low oil prices as the country’s substantial supply enters the market. Iran has tens of millions of barrels of oil in storage and is also home to the fourth-largest oil reserves in the world.

But it might take a while to see exactly how lifting sanctions affect oil markets. Since years of sanctions have weakened Iran’s energy production sector, it will take time to rebuild its ability to produce oil. How long that takes, which also depends on when exactly sanctions are lifted, is uncertain. It will also probably depend on whether Tehran decides to invest in that rebuilding and how much.

“It would have to rehab the oil wells,” Jan Kalicki, of the Woodrow Wilson Center, told U.S. News. “It has huge potential, but to realize that potential, it will need to invest many billions of dollars into the oil fields.”

For many Iranians, the economic impact of lifted sanctions will go far beyond reviving shuttered energy production. The economy has struggled mightily, in large part thanks to those sanctions, and regular Iranians have been desparate for a re-opening.

But it’s important to understand that the biggest consequences of re-opening Iranian markets to the world may be political. For many years, Iranian politicians have pointed to sanctions as a major reason for the country’s faltering economic conditions. Without those sanctions, the regime’s legitimacy could be questioned if there isn’t also a major improvement in living standards and foreign investment.

“If those expectations are not realized as a result of this deal, [Iranian President] Rouhani will be left with the unpleasant task of explaining who has pocketed the benefits of the deal and what Iran got in return of rolling back the nuclear program,” Amir Farmanesh, of IranPoll.com, told The Guardian.

Because of that political pressure, which could mount with elections due next spring, Iran’s leaders may be further incentivized to follow the terms of the nuclear agreement. President Obama said on Tuesday morning that if it doesn’t, sanctions will “snap back.”