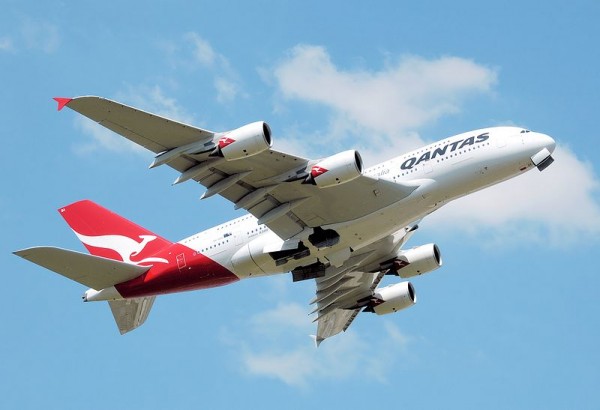 A Qantas A380 with 489 passengers and crew on board made an emergency landing today when one of the plane’s Rolls-Royce engines failed shortly after takeoff from Singapore’s Changi airport. Qantas has grounded all of its A380 flights until it figures out the cause of the engine failure and why the housing on the back of the engine flew off. Air France, Lufthansa, and Emirates, which also employ A380s, will not be suspending their flights. Singapore Airlines, however, will be holding off its A380 routes.

The interesting thing about the Airbus A380 is that, as a so-called superjumbo, it’s the largest passenger jet in the world right now. The nearly 240-foot-long plane has two stories, about 330 miles of wiring, twenty wheels, space for built-in suites, bars and salons, and enough room for 800 people if it only accommodates economy class.

It is, in other words, a behemoth. Airports have had to add emergency equipment, widen taxiways, and adapt skybridges to fit the massive airliner into their infrastructure. It took Airbus parent company EADS 16 years to manufacture the first A380 after conceptualizing the superjumbo in 1991.

It’s no wonder a plane of this bulk and complexity has run into so many problems. From the BBC:

Ever since its launch at a grand ceremony at the Airbus headquarters in Toulouse almost six years ago, the Airbus A380 programme has struggled to overcome a string of complications.

Technical problems led to production slowing down, causing lengthy delivery delays and cost overruns so large that some industry observers question whether the programme will ever make a profit for its European manufacturer.

And there have been operational problems, including an engine failure in September 2009 on a Singapore Airlines flight from Paris, and two tyres bursting on landing in Sydney in March this year.

There are currently 37 A380s currently in operation. In a July 2010 press release, Airbus announced that the 33 A380s flying at the time had transported 6 million passengers since the first A380 delivery. So a low volume of flying mammoths can transport an impressive number of customers.

As with any new, complex product, the kinks are still being worked out of the A380. It’s just that the large number of humans on board makes that prospect a lot more risky.