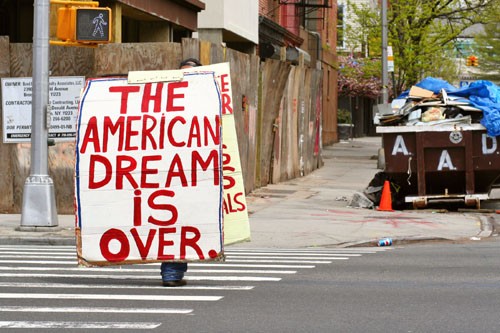 After writing about Anheuser-Busch, Fannie Mae, and GM over the past week, something occurred to me.

Well, many things occurred to me, but this time, something apart from skipping the country until things get better stuck out in my mind.

It was this: During the past week, several key American icons–the suburban house, the SUV, the ubiquitous can of Bud–have fundamentally changed in some way.

Each of these products communicated an intimate brand or notion. Fannie and Freddie, our friendly down-home lending institutions. The Hummer, which could instantly transform you from monarch to wretch, depending on whether you were a driver or a bystander. The ubiquitous can of Bud, reliably available at any sporting event, bar, or house party.

Witness the havoc a single week has wrought on these pet icons:

Icon
Fannie Mae and Freddie Mac: We call these lending institutions by their first names, Fannie and Freddie. Franklin D. Roosevelt, affectionately known as FDR, created Fannie to get the United States through an incredible economic trough called the Great Depression. Since then, the dynamic duo has been serving up enough low-interest loans to allow Everyman to buy a house, even a big one, with barely any cash on hand. Fannie and Freddie’s love were pivotal in building the middle class.

Havoc
Fannie and Freddie, with names reminiscent of overweight, beaming grandparents who still refer to the world in terms of the 1950s, both just narrowly avoided dropping dead. A physician named Ben Bernanke has them on life support.

Icon
Anheuser-Busch: AB’s most recognized brand is Budweiser. As in Bud. As in, here’s your bottled buddy, ready to take the edge off after a long day. Immigrant Eberhard Anheuser brought the brewery to its feet in 1860 in St. Louis. Since, a successions of Augusts and Adolphuses (Adolphi?) have held Bud’s hand through a massive expansion.

Havoc
Bud, the all-American beer buddy, is staring at his tennis shoes and weeping BHA-infused tears in a large boardroom in Europe, wondering what they’re going to do with him next.

Icon
GM, otherwise known as General Motors, proud home of offspring like Jimmy, Hummer, Yukon, and Tahoe. These built-tough thrones with wheels have names like a pack of sled dogs and eat most terrain alive. Hummer, the one with the largest nutsack, can drive through shallow lakes.

Havoc
GM just admitted that at $4/gallon, the Sport Ute is a goner. Hummer, Tahoe, and their buddies are making big, sad headlight eyes in a distribution garage with the word “Mexico” spray-painted on it. Meanwhile, young people around America are looking at diminutive Go-Kart style gas-savers, confounded as to how Toyota Scion could possibly express their rebellious, hardcore natures.

During the past 20 years or so, we have based our identities and experiences around certain iconic products. Those products have changed, on a basic level. As AB, Fannie and Freddie, and GM warp their identities, they make our version of the American Dream unattainable: it will no longer be possible to buy an All-American Bud. Fannie and Freddie won’t be offering easy home loans anymore. The Hummer is going ix-nay.

An entire middle-class identity has, in the period of about a week, indicated its time is up.

We need a dream–and some iconic products–to replace it.