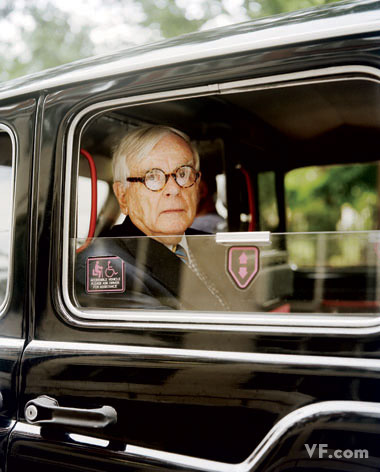 It seems oddly fitting that news of Dominick Dunne’s death is lost in the coverage of Ted Kennedy’s. Dunne wrote about the lives of the rich and powerful, including the Kennedys.

The Australian has a nice piece, by — get this Dominic Dunne.

DOMINICK Dunne, the celebrated American novelist and diarist who dissected the crimes of the rich and famous, lived a dramatic life. And he wanted to die that way. “I want a little drama to it,” he once said. “I don’t want to die under anaesthesia. I’d rather be shot to death.”

The writer did not get his wish, succumbing to bladder cancer on Wednesday at 83. It was not the dramatic finish he had hoped for but friends say he died peacefully and he was in a good frame of mind, surrounded by family in his Manhattan apartment.

Dunne started writing in earnest in 1982 after the murder of his actress daughter Dominique, who at the time was starring in the movie Poltergeist. She had been strangled by her boyfriend and died a few days later inhospital. The night before the trial Dunne was at dinner and found himself seated next to Tina Brown, who had just taken up the editorship of Vanity Fair magazine.

Of course, Vanity Fair has a memorial as well.