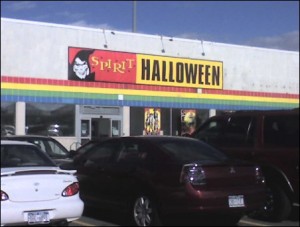 I’ve always been curious about the Spirit Halloween Stores that pop up like short-lived suburban mushrooms every fall.

While I was shopping at one store last year, I asked one of the store managers what he rakes in every season. He said he’d pulled in $80,000 during the past few days (I was shopping for my costume Halloween day).

I don’t know if he was telling the truth, but the number sounded impressive. This year, I decided to figure out what the heck Spirit Halloween stores are. Turns out their pattern of feeding off carcasses has helped live up to their name.

Two major carcasses stand out as delectable carrion for Spirit:

Spirit, a large nationwide chain, was bought up by Spencer’s Gifts a few years ago. Spencer’s happens to be led by former Linens n’ Things president Steven Silverstein. Now the L n’ T has failed, Spirit has quite a few sizable retail carcasses to inhabit with its ghoulish goods.

A private equity firm named ACON Investments owns the majority stake in Spencer’s. It just so happens that the purchase that catapulted ACON into PE success was an Enron carcass company called Mariner Energy. The Washington Post:

In early 2004, when (ACON) identified Mariner as a potential buyout, the company was toxic, and it wasn’t for sale. It was controlled by a special-purpose entity known as Jedi, one of those cockamamie “Star Wars”-named gimmicks ginned up by Enron’s accounting magicians…Though Enron may have started out with designs to expand its deep-water oil exploration — Mariner’s specialty — it instead used Jedi to goose its profits.

…being a part of the Enron bankruptcy meant it was at a standstill. It couldn’t borrow money for expansion or do acquisitions. It needed a new owner.

ACON walked in, bought up, and came out with a screaming deal that netted it hundreds of millions of dollars and a company with stellar management. Not bad for a find from Enron’s garbage heap.

In fact, ACON might just be the poster child for other companies looking to prey off the economy’s growing pile of stiffs and zombies. There certainly are enough of them.