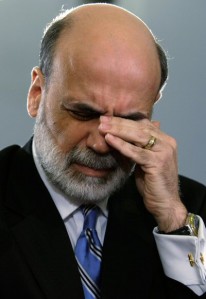 In the spirit of scrambling to keep tabs on federal attempts to grease our economic machine, here’s a roundup of the government’s latest news-making moves:

Forbes reports that the Fed unveiled the Money Market Investor Funding Facility (MMIFF), which will buy up as much as $6 billion in money market instruments, such as CDs, commercial paper close to maturity, and bank notes. The MMIFF will use private SPVs (special purchase vehicles)–five of them are run by JP Morgan Chase–to buy debt from ten issuers.

Money market funds are chock-full of bad assets. The Fed’s move aligns well with the goals of the bailout bill, which appears to be unveiling the severity of what we know only as the “credit crunch” every time it takes a step forward.

Thoughts:
-Trickle-down economics is far from dead. The Feds just employed JP Morgan Chase to snatch up bad debt. Money, in other words, trickled from the government to private business. Wonder where it will go next? And how much is involved?

-Where is the Fed getting the money to pay for all this bad debt? Taxation futures?

From the Chicago Tribune:

Federal Reserve Chairman Ben Bernanke on Monday conceded that the sagging U.S. economy may need another jolt of billions of federal dollars to ward off a deep and lengthy downturn.

It was the first time that Bernanke had embraced the idea of an economic stimulus plan offered by congressional Democrats. Shortly after Bernanke showed a willingness to back such a proposal, the White House indicated newfound support for the idea.

Bernanke testified that any plan should include measures to help improve access to credit by consumers, homeowners and businesses.

“Such actions might be particularly effective at promoting economic growth and job creation,” he said.

If EconBrowser‘s James Hamilton is right in his post, Bernanke can’t be happy about pushing another stimulus package. Another huge stimulus puts the country at risk for excessive inflation, something Bernanke has so far managed to mitigate pretty well.

But that’s the future, a land of increased taxes to pay for the bailout, and potentially a land of great inflation. Right now, the media is fond of reporting that the credit crunch shows “signs of thawing,” as evidenced by an increase in the number of bank-to-bank loans permeating the market.

The most important question remains: Where should the stimulus go? The brunt of our previous checks went to savings accounts, paying off debt, and gas, according to Irwin Keller at MarketWatch. The government knows that, so I question whether we’ll be seeing stimulus checks in our mailboxes anytime soon.

Thoughts:
-Congress has discussed increasing unemployment benefits, increasing Medicaid benefits, and putting money into infrastructure projects that are ready to launch. This kind of stimulus would float people through bad times, leading me to believe that the word “stimulus” is a misnomer for “survival kit.”

-The government is spending exorbitant amounts of money it doesn’t have. The actions taking place now will affect the nation’s next president more than they are affecting anyone today. The next president may well be our generation’s Herbert Hoover, elected in a wave of optimism, but crippled by the economy. I hope this is not the case.