Football has long been America’s most popular sport. While baseball is the American pastime and holds a special place in the hearts of sports fans, it has yet to surpass football in terms of either broad appeal or revenues. Nor is the National Football League the only beneficiary of football’s enduring popularity. Indeed, in parts of the country with unsuccessful NFL teams (or no NFL teams), college football is just as popular – and just as lucrative. Likewise, an accomplished head coach at a prestigious college program can easily command several million dollars per year in salary, and the football teams themselves figure prominently in the entire cost structure of their universities. Today, Business Pundit examines the 12 most valuable NCAA football teams. 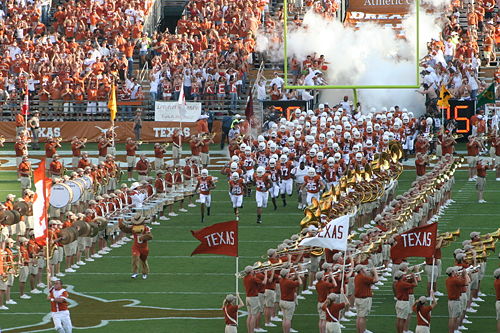 Not only are the Texas Longhorns the most valuable college football team, they are also the most valuable NCAA team in any college sport. According to CBS Sports, the Longhorns are valued at approximately $119 million, and turned a $59 million profit last year. Perhaps appropriately, the University of Texas made its head coach – Mack Brown – the highest paid football coach of any college program, committing $5.1 million for next season on December 10, 2009 according to USA Today.. In doing so, Brown became the first NCAA football coach to cross the $5 million per year barrier. However, the salary is being paid from athletics department revenue, which “receives no government or institutional support and has transferred more than $6.6 million to the university since the 2005-06 fiscal year.” University of Texas is also “among 25 of 120 major-college programs that made more on athletics than they spent in 2007-08.” 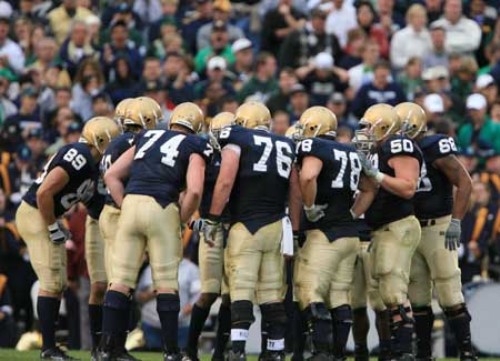 The team the Longhorns surpassed as the most valuable college football team is this year’s number two – Notre Dame’s Fighting Irish. Valued at $108 million and boasting profits of $38 million (according to Forbes) the Fighting Irish have long been one of the most widely followed teams in NCAA football. Seven Heisman Trophy winners have played for Notre Dame, as well as 95 consensus All-Americans. Furthermore, Notre Dame Stadium (where the team plays its home games) seats more people than some NFL stadiums do – 80,795 at last count. The team has also won eight national championships, and owes much of its current value to consistently being a contender year in and year out. 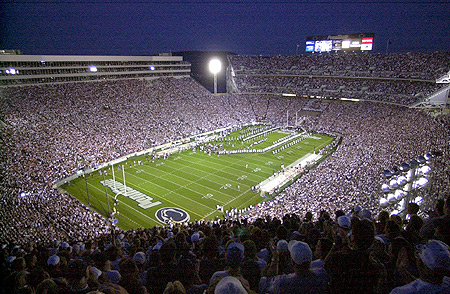 Another highly valued NCAA football team with a rich history is Penn State’s Nittany Lions, said by ESPN to be the most valuable team in the NCAA’s Big Ten conference. ESPN reports that Penn State’s “team value is $99 million, and the program makes a profit of $50 million.” Its ranking as the third most valuable NCAA football team is a ten spot leap for Penn State from the last time rankings were compiled. Coached by the legendary Joe Paterno (who earns roughly $1.5 million per season), Penn State figures to continue its run as one of the most prosperous college football teams in the country for quite some time. 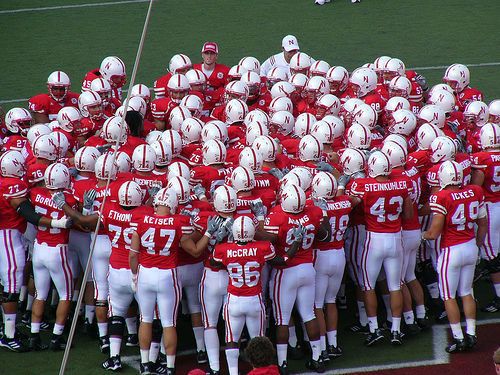 At first glance, it probably seems strange to see a Nebraska team rank so high on this list. A state which sells t-shirts that proudly exclaim “Nebraska – We Got Nothin” doesn’t exactly smack of athletic excellence or acclaim. However, the Cornhuskers are actually the fourth most valuable college football team in America, turning a $49 million profit on a $93 million total value. Loyalty is also alive and well at the school. According to Forbes, “donations required by Nebraska for season ticket holders to keep their seats totaled $15 million last season.” Head coach Bo Pelini is the 25th highest paid coach in college football, earning just a shade over $1.8 million per season. 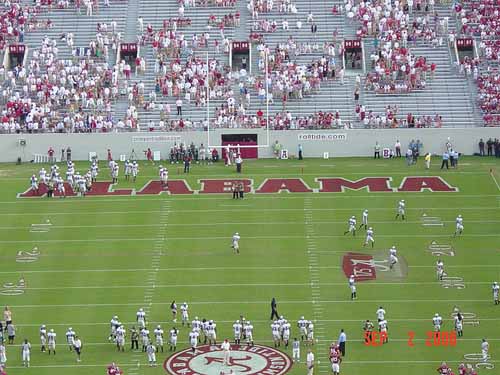 The popularity of the Alabama Crimson Tide is hard to exaggerate. According to Forbes, the team’s “waiting list to obtain season tickets for the Crimson Tide is currently 15,210 names long.” Furthermore, simply being next up on the list is no guarantee of getting tickets. The only thing coming up on the list entitles you to do is “make a donation to the athletic department ranging from $5,000 to $500,000” depending on the location of seats you wish to buy tickets for. Crimson Tide head coach Nick Saban is the fourth highest paid coach in college football, raking in about $3.9 million per season. 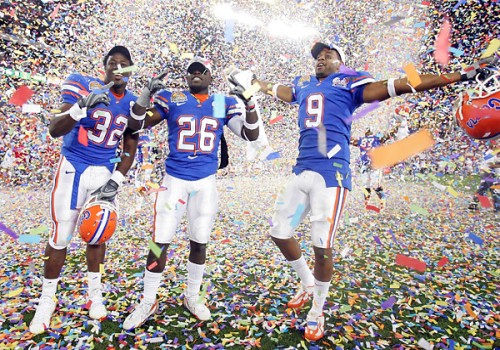 The Florida Gators are the sixth most valuable college football team as judged by Forbes’ rankings. Valued at $88 million, the Gators turned a $41 million profit season while fans of the team “shelled out a total of $145,000” for the right to inscribe their names on the brick pathway leading up to the team’s 88,548 seat Ben Hill Griffin Stadium. If you’re wondering what could possible inspire such passionate devotion in a team’s fans, it is nothing more than an undisputed legacy of winning. The Gators have won three national championships, eight Southeastern Conference Championships, produced 138 All-Americans, thirty-eight first round NFL draft picks and three Heisman Trophy winners, en route to being one of the winningest college teams since 1990. Head coach Urban Meyer is the third highest paid coach in the NCAA at $4 million per season. 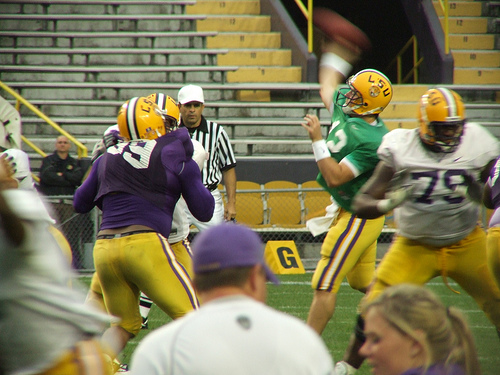 Valued at $68 million, Louisiana State’s Tigers are a tremendous economic asset to the surrounding community. Besides turning a $39 million overall yearly profit, it is estimated that $8.2 million in direct spending is generated by visitors to East Baton Rouge Parish by each game the Tigers play at the 92,400 seat Tiger Stadium. With three national titles and thirteen SEC conference titles, the Tigers have an enduring track record of success, which explains the massive influx of visitors to each home game. It’s fair to call the Tigers an economic juggernaut, and it looks to remain that way for the forseeable future. 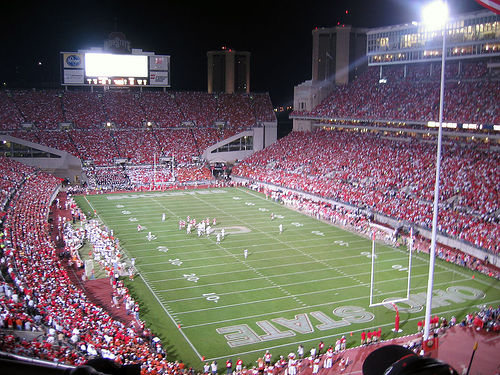 The second most valuable Big Ten football team in the country (and eighth overall) is the Ohio State Buckeyes, valued at $85 million by Forbes. It’s a two spot rise for Ohio State, who occupied the 10th spot last time rankings were compiled. It’s also worth noting that Ohio State is the only school to have its teams in the top 10 of Forbes’ football and basketball rankings (its basketball team is the 10th most valuable in the NCAA.) Interestingly, however, the immense financial and athletic success of the school has not translated to an astronomical coach’s salary. Buckeyes coach Jim Tressel is paid at a level one might expect given the school’s sparking track record, with Cleveland.com reporting that the coach signed a $3MM per year extension in 2008. 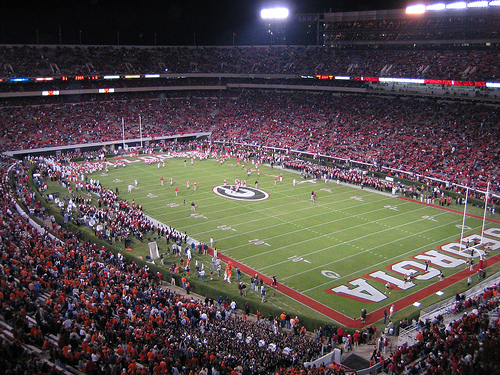 Valued at $84 million (with profits of $45 million) the Georgia Bulldogs can lay claim to the third-highest merchandise sales of any college last year, after only Texas and Florida. Head coach Mark Richt is the 10th highest paid coach in college football at an annual salary of $2.9 million. The school routinely sells out home games at its 92,746 seat Sanford Stadium, has won 2 national titles, 12 SEC conference titles, and has produced two Heisman Trophy winners, as well as 28 consensus All-Americans. 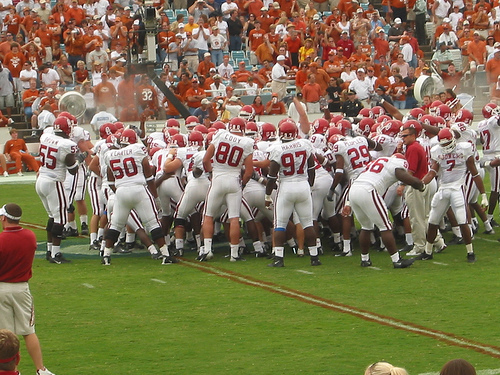 One of the greatest measures of a team’s popularity is how much of the athletic department’s donations are generated by the team itself. It would be tough to imagine beating the Oklahoma Sooners in that department, especially after 92% of the $19 million raised in donations last year was generated by the team. Such a tremendous amount of fan loyalty goes a long way toward explaining the $83 million value attached to the Sooners, as well as the $40 million in profit last year. Head coach Bob Stoops is the second-highest paid coach in the Big 12 conference and the fifth highest overall, earning a yearly salary of $3.8 million to spearhead the Sooners on-field strategy. 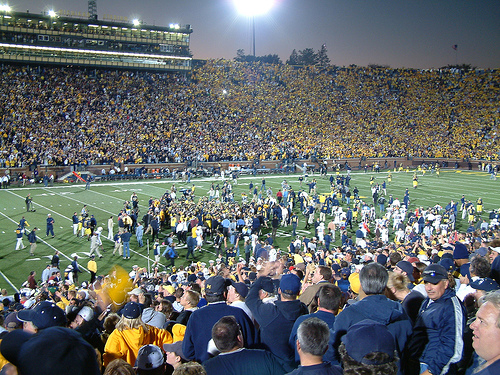 The third most valuable Big 10 team (according to ESPN) is the University of Michigan Wolverines. It was somewhat of a down year for Michigan however, which slipped to number 11 from number 4 last year. Nevertheless, the Wolverines are valued at $81 million, turned a $34 million profit, and is preparing to embark upon a “400,00 square-foot expansion project that will add 83 suites and 3,200 club seats to Michigan Stadium” that is expected to be completed in time for the start of next year’s season. Head coach Rich Rodriguez earns $2.9 million per year, placing him in a three-way tie for the 9th highest paid NCAA football coach in the country. 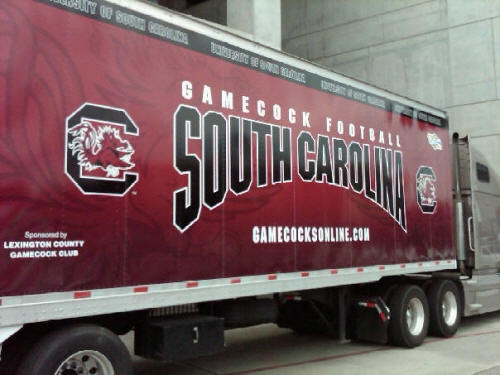 Last but not least, the South Carolina Gamecocks round out our list of the 12 most valuable NCAA college football teams. Valued at $80 million, the Gamecocks are coached by the accomplished Steve Spurrier, who coached the Florida Gators to six SEC championships and himself won the Heisman Trophy in 1966. Spurrier, who earns $1.8 million per season, has the luxury of presiding over a Gamecocks team that will almost certainly rise in value next yearas a result of $6.8 million raised by “a points system that ties donations to football seating assignments”, Forbes reports. For a team that already turns in a yearly profit of $37 million, the future looks bright for South Carolina, which was also the 12th most valuable college football team in last year’s rankings.