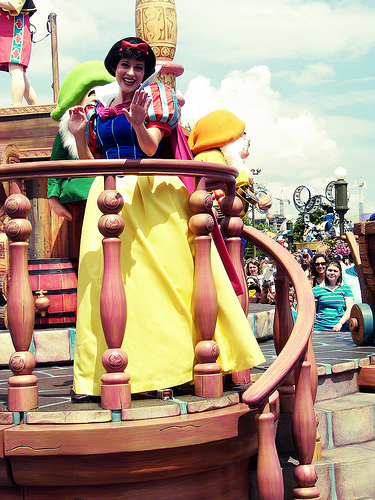 Walt Disney Studios Home Entertainment announced this week the launch of their new Diamond Collection, which they hail as the ‘definitive collection of the Walt Disney Studios most historic and beloved animated classics’. These gems will debut beginning with Snow White and the Seven Dwarfs on October 6 on Blu-ray Hi-Def.

“Walt Disney’s gift of telling captivating and engaging stories was matched only by his passion for presenting them in the most spectacular way,” commented The Walt Disney Studios Chairman Dick Cook.

While Walt may have had the gifts of crafting and presenting stories, the marketing department at Disney has a magical way of making consumers believe they must buy whatever digital format are currently hot right now – right now – or risk losing the chance forever.

As in – buy these VHS tapes while you can, before Snow White or Cinderella or Princess Whoever is waltzed back into the Disney Vault for who knows how long. They said that on all the commercials.

Two titles will be selected each year, including Beauty and the Beast and Fantasia in 2010, as Blu-ray Diamond editions, each title will be released from the Disney vault for a limited time.

And that, children, is the magic of Disney.