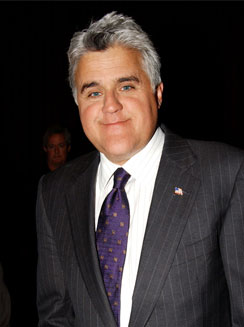 NBC announced yesterday that it will cancel The Jay Leno Show on February 12. The network may move Jay Leno back to his old 11:35pm slot, while shuffling Conan O’Brien and Jimmy Fallon to later slots. MTV has more details:

Though comparatively low-rated, Leno’s show was performing at the expected levels for the network, (NBCU chairman Jeff) Gaspin said (at yesterday’s press conference), but “it did not meet our affiliates’ needs.” Those affiliates had been grumbling for months that the sub-par numbers for Leno’s show — which took up an unprecedented five hours a week of important prime-time programming slots — were hurting their local news divisions by not providing a strong lead-in to the 11 o’clock broadcasts, thereby costing them precious ad dollars. Some affiliates had even begun a move to push Leno’s program back an hour to 11 p.m. and push local news to 10 p.m. in order to reverse the ratings trend.

The current plan calls for NBC to try and work on deals with Leno, (Conan) O’Brien and Jimmy Fallon, with a possibility that Leno will return at 11:35 p.m., followed by O’Brien at 12:05 and Fallon at 1:05 a.m. In that scenario, O’Brien would technically keep the title of host of “The Tonight Show,” though a 12:05 start time is not what he signed on for when NBC offered him the coveted “Tonight Show” gig in 2004.

The New York Times’ David Carr talks about what the fallout means for NBCU:

For big corporations, it is often about defense, so it made some sense to put Jay Leno on a timer in order to hang on to the very talented Conan O’Brien. And when NBC struggled to compete with its network brethren because of bad programming bets, it addressed the decline by changing the game, busting up the prime-time grid and inserting Mr. Leno at 10 p.m.

At the time, it was viewed as a way to cut costs and keep a proven talent away from competitors, while making room for the ascendance of Mr. O’Brien to “The Tonight Show.” Everybody hugged. It was win-win, right?

But the not-so-reinvented, not-so-funny “Jay Leno Show” had the ratings of a night light, setting off a revolt from affiliates that, according to Ad Age, had a terrible year, with a breathtaking 22.4 percent drop in revenue from 2008. And it didn’t help that Mr. O’Brien was pummeled on Mr. Leno’s old perch. The fiasco suggests that networks mess with the inertia of viewing habits at their extreme peril.

Of course, the mayhem was terrible news for another NBC guy, a by-now veteran performer who has to be wondering what this failed experiment means for his future in the business. That would be (NBCU CEO) Jeff Zucker…it was Mr. Zucker who decided to fix the network’s problems in prime time by putting late night franchises in play and it was, in the end, Mr. Zucker who decided that the solution to bailing out a leaky boat was to blow more holes in the bottom. Mr. Zucker has a three-year contract with his incoming bosses at Comcast, who will probably notice that everything around him is now horribly damaged. Not since New Coke has a storied brand been so thoroughly maimed. “The Tonight Show,” once a gilded entertainment franchise, is now just one more broken toy in the mistake pile.

Carr adds that NBC is sending a message to its younger audience: “a legacy industry will default to legacy assets and ride them down to the bitter end. NBC has turned two of its biggest stars into the equivalent of Jon and Kate: two wounded parties biding their time until the divorce comes through.”

Forbes says that NBC is going back to basics in terms of programming:

What will fill the suddenly vacant 10 p.m. programming block this spring is not yet clear. Gaspin expects two nights of scripted programs along with one reality show, some Dateline hours and repeats.

Looking further into the future, he says NBC will “go back to the basics,” a marked shift for a network that has become famous for “reinventing”–or attempting to reinvent, anyway–the broadcast model in recent years. In addition to returning to the traditional upfront presentation format and schedule in May, the fourth-place network will also put a priority on scripted drama again.

NBC has created a situation in which Conan O’Brien might defect, Jay Leno gets a good laugh, and viewers lose trust in the network. NBC’s moves also show that innovation can be deadly for broadcast TV.

I can only conclude that broadcast is dying a slow death. And the biggest losers during the process are viewers.