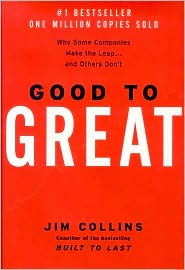 There is usually information in what someone doesn't say. Long time readers may have noticed that I have never reviewed one of the most popular business books of all time – "Good to Great." Call me a heretic, but I'm not a fan of it. It's one of the best selling business books ever, but I think there is too much fluff, and I think the research team made a huge mistake when compiling it.

Before I go into detail, let me say that I think Jim Collins is a bright guy and I admire what he attempted to do with the book. His major mistake is a very common one – one that rarely gets noticed. I will also say that there is still value in reading the book. There are some good ideas inside (like the "stop doing" list), but I'm sick and tired of people taking it as gospel. I've read too many things like this:

This nearly 300-page book is packed with leading edge thinking, clear examples, and data to support the conclusions. It is a challenge to all business leaders to exhibit the discipline required to move their companies from Good To Great.

That, and the fact that the sales seem to be driven as much by churches as by businesspeople, is what finally made me write this post. (The point there being that it has sold more than other business books in part because it had a secondary market). "Good to Great" might encourage you and give you some good ideas, but it isn't a panacea to creating great organizations.

I read "Good to Great" in 2004 and lumped it together with most other business books. It was ok and there were a handful of sentences I underlined to go back to for inspiration, but it didn't impress me the way some books do. One day I happened to be chatting with someone that had worked with one of the good-to-great companies during the supposed transformation, and this person said the company was all screwed up inside. So that got me thinking…is "Good to Great" sound research?

I picked up the book and re-read it. A couple of things struck me.

The Corporate Barnum Effect
First of all, the good-to-great principles are true in the same way a horoscope is true. They are fairly generic and thus we all apply them from our own viewpoint to make them true. I believe that some "Good to Great" readers that love the book may be suffering from the Barnum effect. The principles Collins proposes aren't bad ones, but they are ambiguous and open to interpretation, which in effect decreases their usefulness. For instance, Collins says good-to-great companies practice "First Who, Then What," which basically means "hire good people." I'm willing to bet no one read the book and said "Eureka! I've been hiring slimy weasels when I should have been hiring top performers. That is why we aren't a great company." My guess is that most people think their way of hiring or interviewing is the best way to get the "good people" and so they liked hearing Collins say this. They ignore the fact that after reading the chapter, you really don't have a better idea of how to do it.

Vague but Appealing BS
Level5 leadership is vague. The only trait people seem to agree on is that level 5 leaders have humility. Humble leaders can be a good thing, but if Jim Collins can't even tell whether or not Jack Welch was a level 5, what chance do the rest of us have?

Q: Was Jack Welch a Level 5?
A: His report card does not come in until [new CEO Jeff] Immelt exceeds him. If Immelt does not exceed him, then he has failed. Jack Welch did not make GE great. GE was already great. Every GE CEO has been to his era what Welch was to his, without exception. It takes 50 years to create a GE. Generations of leaders built it. Whether Welch was a Level 5 comes down to a question we don't know the answer to. Was Welch first and foremost ambitious for himself or for GE? Only he knows that.

Isn't Collins supposed to be the expert on Level5 leadership? Hasn't more been written about Jack Welch than about most other CEOs? And Collins can't tell? He's either being diplomatic and refusing to say "no, Welch wasn't" or Level 5 leadership is business jibber jabber. Since it is vague, it allows us all to see ourselves as Level 5 leaders because of the Lake Wobegon effect. So we read this book and we feel good, like it describes our leadership style (more Barnum effect too).

Humans have a confirmation bias. We look for things that validate our preconceptions. But when you reach a conclusion you have to say "what would it take to prove this conclusion false?" The most popular example of this is this card test.

Collins' team looked at the companies that went from good to great and said "what do all these have in common?" They never went back and said "are there any companies that have these traits that did not make the leap from good to great?" And I understand why they didn't. Because these principles are vague and it would be hard to debate whether or not an unsuccessful company was doing these good-to-great things. You could always say a company is in the process and will soon be great. Or you could say so and so isn't a *real* level5 leader. I tried to find some examples, but I kept coming back to the same questions. How can you definitely say whether or not a company is following the good-to-great principles? You can't.

Surivorship Bias
Somebody has to win. Somebody has to be the best. And being the winner does not always mean you have some skill. The belief that it does is called the survivorship bias, and it may apply to good-to-great. I really don't know. Were the good-to-great companies examples of survivorship bias? I'll be honest in that I don't fully understand how to analyze it or I would. (For years I have been nagged by the question of whether or not Warren Buffett is successful because of suvrivorship bias. I lean towards no, but I don't know how to prove it.) What I do know is that humans tend to conveniently make random demarcations in data to get the patterns and results that we want, when you are looking for something specific, it is amazingly easy to find data to support your preconceptions.

What They Don't Know
Collins also doesn't know what he doesn't know. In other words, maybe there were causes that he and his research team were not aware of. Perhaps executives at the good-to-great companies better understood the economics of their industry. Or maybe they were more financially saavy and understood how money flowed through the company and where their profit really came from. It is common for companies not to really understand these things fully. But Collins would have no way of uncovering that, and even if he did, who would write a book that encourages would-be business leaders to study up on the economics of their industry and better analyze cash flow statements? It wouldn't sell very well because that stuff is boring and hard.

The Tom Peters Criticism
Tom Peters has pointed out that Collins procedure may not have identified the companies most of us would consider great.

Point No. 2 is that companies that Jim calls great have performed well. I wouldn't deny that for a minute but they haven't led anybody anywhere. I don't give a damn whether Microsoft is around 50 years from now. Microsoft set the agenda in the world's most important industry at a critical period of time, and that to me is leadership, not the fact that you are able to stay alive until your beard is 200 feet long.

He has a good point. Has Collins really used the right criteria for greatness?

An alternate explanation
I would say that companies that most of the things Collins mentioned can be summed up by saying "good companies make good decisions." Hiring the right people? That describes a company that makes good hiring decisions. Confronting brutal facts? That is an important part of the process of making good decisions. Using technology the right way? Again, the result of good decision making. I would say that great companies don't have a list of platitudes to follow, as "Good to Great' would imply, but that they simply have good processes for making business-related decisions.

Lest you think I am the only person out there unimpressed by the book, check out Wharton's review of it.

Collins asks an interesting question. Unhappily, the methodology he used to formulate an answer is questionable and the answer is almost disappointing in its simplicity: Great companies become great by staying focused: focused on their products, their customers and their businesses. They aspire to higher levels of excellence, are never content to become complacent and are passionate about their products. They have leadership that is not ego-driven, and have organizational cultures that embrace constant change. That's the book.

And instead of sending me hatemail about how stupid I am for criticizing the world's greatest business book, you can criticize mine instead. I wrote the first chapter for the business book More Space. So go download it (click on an author's name) and mark it up. And while you are at it, download the chapters written by Lisa and by Marc. They have more practical value and immediate application to your work life than "Good to Great" ever will.