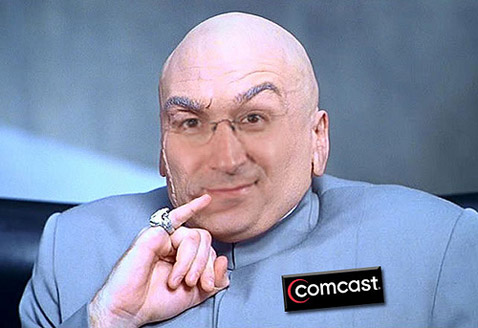 General Electric’s $5.8 billion purchase of Vivendi’s minority stake in NBC bodes well for Comcast. The cable giant could buy a 51% stake in NBC as soon as Thursday. The Guardian has more:

This transaction will mean that GE owns 100% of NBC and it will allow the sprawling US industrial group to press ahead with an imminent plan to sell a majority of the business to Comcast – a buyout that could reshape a significant chunk of the media industry.

NBC’s businesses range from a coast-to-coast mainstream US television channel to Hollywood’s Universal Studios and specialist broadcasting offerings such as CNBC, Bravo and the Weather Channel. The company is valued at $29bn and Comcast could tie up a deal to snap up 51% as early as Thursday.

Analysts say that a sale makes sense to both GE and Vivendi which have seen NBC’s television ratings flounder. But critics are alarmed that Comcast, which is America’s biggest cable operator, will end up with too much sway over consumers. The media mogul John Malone, who chairs the Discovery Channel-to-QVC empire Liberty Media, recently remarked that Comcast would have “too much power” by controlling both content and delivery allowing it, potentially, to charge high prices to other cable operators who want to carry NBC.

The New York Times says that the GE originally bought into media as a hedge, at a time when Japanese manufacturers were an increasing threat. Now, GE is shedding its media unit to focus more strongly on its industrial businesses, while reducing debt incurred by its big finance branch. As far as Comcast, the Times has this to say:

…Comcast was the lone serious suitor (for Vivendi’s stake), a testament to the uncertain future of mainstream media, as the Internet has fractured audiences and few viable business models have emerged for the distribution of content online. Comcast…has long harbored big ambitions of becoming a major producer of television and movies. In 2004, Comcast failed in a hostile takeover bid for the Walt Disney Company.

In the proposed deal, Comcast will contribute its own cable channels, which include Versus, the Golf Channel and the E Entertainment channel, and a modest amount of cash, about $5 billion, to a joint venture in which it will own 51 percent. G.E. will retain a 49 percent stake, and would likely reduce its ownership over several years.

(Some analysts think that) the deal is a bet by Comcast on how it can grow its business. It could use its power in film, with Universal Studios, to expand video-on-demand offerings by altering movie release windows to make movies available on demand the same day they are released on DVD, noted Craig Moffett, an analyst at Sanford C. Bernstein.

According to Bloomberg, Comcast will face a “gauntlet” of regulators before the deal goes through:

“This deal will really be scrutinized very strongly,” Benjamin Stretch, an analyst at Macquarie Capital USA Inc. in New York, said on Bloomberg Television today. “It is the first major test of the FCC and the Obama administration, in terms of how they want to manage media and technology and distribution policy in this country.”

Regulators probably will examine whether Comcast might use NBC’s programming to undermine rival pay-TV services such as those of Dish Network Corp. and Verizon Communications Inc.

There is no FCC rule against a cable company owning a broadcaster, said Andrew Jay Schwartzman, president of the Washington-based Media Access Project, a nonprofit media law firm. That wouldn’t prevent the agency from weighing whether such an arrangement serves the public interest, Schwartzman said in an interview.

The way the government handles the Comcast-NCBU merger has a strong bearing on the future of broadcast and the Internet. If more media and cable companies consolidate, it will be easier for them to regulate TV and online content. News will be behind a pay wall not because pay content won out in the free market, but because media consolidation allowed companies to hyper-regulate what content the public sees.

Think about how many consumers already have no choice about which Internet provider to use. I can only see that choicelessness expanding if the merger goes without a hitch.