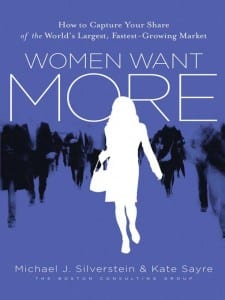 In 2008, the Boston Consulting Group ran a lifestyle survey of 12,000 women in 22 countries. Their survey findings inform the conclusions in Women Want More, a book that details the burgeoning women’s consumer market.

Each chapter includes statistics, company stories, and anecdotes from individual women. Readers finish the book with an idea of how women behave as consumers, and how to gear their products for success in the female economy.

Recommended for: Corporate leaders and marketers who want to tap the growing women’s consumer products sector.

Women comprise a huge potential market for companies. They control almost $12 trillion of the $18.4 trillion in worldwide consumer spending (65%). By 2028, they will control 72%. Over the next five years, they will gain $5 trillion in earned income. The result? A consumer market bigger than China and India.

That’s just the beginning. So far, 80% of unemployment growth has been male, making the term he-cession ring true. Women own 40% of US businesses—and that number is growing. Women make most of the household decisions about travel, cars, and electronics. Many control household finances.

With economic potential like that, companies need to think seriously about catering to discerning females. “Making it pink” just won’t work.

After reviewing the results of their survey, the authors came up with some noteworthy findings. Some of it is familiar: People have either researched and concluded it before, or it sounds like common knowledge:

1) Most women are employed.

2) At the same time, women still do all the housework.

4) Finally, in an unrelated vein of womanhood, they don’t feel skinny or pretty.

Sayre and Silverstein also uncover some tidbits that you may not have heard before:

* Women’s happiness, as correlated with age, is a V-shaped curve. That means women are happiest when they’re young and old, but not so much in between.

* Love, health, honesty, and well-being are the four most important values to women

The authors claim there are still a lot of first-mover advantages in the female market. Overall, women fell pressured for time and stressed. They’re constantly looking for products that meet their specific needs (unlike men, who are more loyal to brands). If you create a product that saves women time, feel in control of their finances, or offers other key features as defined in the book, you, too, can capture your piece of the femme pie.

To learn exactly how to address women’s needs, you need to consider the archetype your target market belongs to. The authors divide women into six archetypes. They’re based on economic class, age, and family status:

Pressure cooker: 22% of the population, 23% of earned income
Middle-income, middle-aged, never enough time in the day

Managing on her own: 10% of population, 9% earned income
Divorced/widowed, making a lot of decisions by herself

Companies need to understand exactly who they’re trying to serve, and refine from there.

Although the archetypes serve the purposes of this book well, they don’t take culture, lifestyle, and other important market aspects into consideration. They’re a starting point for companies, but not a definitive guide for defining a market segment.

Features of Each Chapter

After explaining the archetypes, the book explores different categories of products that women care about. Each chapter is devoted to a category. Food, fitness, beauty, and apparel make up the first four categories. Financial services and healthcare, which women perceive negatively, make up the next two.

The authors cover how women perceive each product category, how they spend their money on it, and how archetypes react to it. Quotes, statistics, and anecdotes about individual women add flavor to the chapter.

The authors also describe commercial opportunities in each category, illustrating them with major corporations that “got it right.” These include Whole Foods, Curves, Olay, Banana Republic, and several other large corporations.

Next, the book talks about women in low- and high-growth global economies. The former include Japan and Europe. The latter include BRIC, Mexico, and the Middle East. Readers learn more about the characteristics of women in those countries, and how to cater to them.

Before concluding the book, the authors detail women’s attitudes towards charity and giving.

The book is well-written, even fun to read. The statistics, stories, and quotes in each story engage readers with the subject matter. Some topics might feel familiar—of course women don’t have enough time—but the book adds value to previous assumptions by going into specifics.

Sadly, several of the characters in the book aren’t original. One was sourced from Wikipedia; another came from a blog. BusinessWeek reporters uncovered this irritating fact in September. The authors have agreed to make revisions.

Also note that the book targets leaders of large, consumer-goods corporations (who might, incidentally, read the book and hire BCG consultants). It doesn’t go into depth with regards to service industries, outside of financial and healthcare services. It doesn’t give readers refined tips, or schedules on how to revise their product offerings. One assumes that’s where the consultants come in.

The book provides a general reminder to capture a growing market. It gives a deeper definition of who inhabits that market. And, as far as business books go, it is conventional. It covers established companies and brands. It does not mention burgeoning industries (eg. the green industry) or edgy innovations.

The material is in-the-box and focused on big companies. Undoubtedly, that serves a purpose. Just know that the business wisdom within won’t push many boundaries.

In sum: Useful and fun to read, but not groundbreaking.

Learn more about the book here.

Full disclosure: BCG sent us a free copy of the book to review.