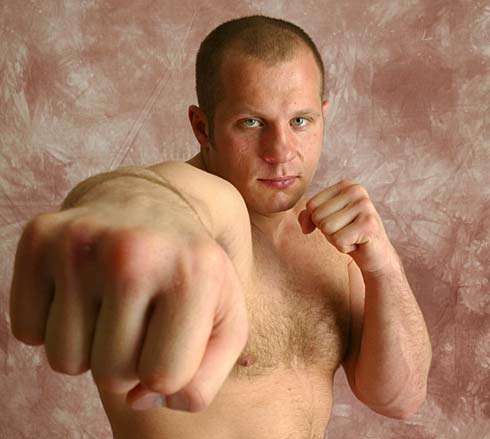 Fedor Emelianenko has been called the baddest man on the planet. We think a case can be made that he is the most fit man to have ever lived in the history of our species. Undefeated for nearly a decade, this MMA (mixed martial arts) hero’s explosive ring style leaves opponents and spectators stunned.

On November 7, Fedor fights American Brett Rogers in Chicago. Rogers has remained undefeated for two years—but will his aggressive fight stand up to Fedor’s thunderous punches and uncanny ability to power out of submission attempts?

Fedor is one of this decade’s most skilled athletes. When you investigate him more closely, it becomes clear that he has set himself up for success. Discipline, a simple routine, the right support network, and calm before the fight are some of the secret ingredients to Fedor’s unparalleled success. Business can learn from his style. Here are ten business lessons that Fedor can impart:

Fedor stays calm and stoic before a match, to the point of looking bored. Unlike some of his opponents, he doesn’t get himself pumped up or trash talk before a fight. Instead, he has been known to play cards with his friends. When Fedor enters the ring, he does so with respect. He saves all his energy for the fight.

During Fedor’s fights, that focus pays off. Nobody has proven a match for his explosive speed and power in almost a decade. Moreover, Fedor’s calm demeanor adds to his mystique. It disarms many opponents, giving him an instant advantage. They just can’t read him. It makes them nervous–which is something Fedor benefits from.

2. Focus on the fundamentals

Fedor appears nonchalant and stoic–until he throws a punch. He wastes no energy on appearances. He doesn’t express emotion during fights. By not distributing his energy elsewhere, he is able to focus completely on a fight. And by focusing completely, he is able to use more energy in the fight. And win.

Fedor knows that a fighter is as good as the work he puts in. He keeps a regular, intense training schedule. He runs five miles in the morning, then wrestles, practices boxing, grappling and sparring, and strengthens by doing pull-ups, crunches, and dips.

He doesn’t take days off. He does everything from start to finish—and devotes himself completely. That takes an incredible amount of discipline and endurance.

This preparation and discipline pays off in the ring, where his focus doesn’t waver.

As he ascended through the MMA ranks, Fedor easily could have grown complacent, relishing his position on the top. But he didn’t. He doesn’t see himself as the best, but as someone who is always growing. He is always getting better. And that attitude keeps him on top.

Fedor adheres to a steady, normal routine. It’s the same basic routine, week in and week out. And it works.

Moreover, he trains virtually in secrecy. His seclusion keeps him from being distracted by fans, fads, and other potential weakeners of the will. Moreover, his seclusion adds to his mystique. He always keeps everyone guessing—in part by staying guarded about his own routine.

His consistency also pays off in the ring, where he remains undefeated.

6. Stay steady in a storm

When Fedor fights, he explodes on his opponents. Any opponent has good reason to be scared of him before entering the ring. Yet Fedor is always respectful of his opponents. When he enters a fight, he wishes respect. He doesn’t glare or talk or move around. He’s inert and polite—until he starts hitting.

8. Have the right team

Fedor surrounds himself people he knows well and respects. He trains with longtime grappling, boxing, and Muay Thai coaches. His doctor Oleg Neustroev is also his masseur and psychologist. He is close to his training partners. He also remains close to his friends, who have known him for a long time, and family. He and his priest are also close. His good relationship with his team gives him a tight-knit, steady support network.

Fedor’s stellar fighting has inspired millions of fans. But he doesn’t let fame fluff up his ego. Instead, Fedor uses popularity to help others succeed. He enjoys trying to be useful to people. He takes on the role of a mentor instead of a superstar. He teaches classes. Before the Beijing Olympics, he carried the torch for Russia in St. Petersburg. He is exemplary rather than haughty, which proves his strength of character.

Fedor knows life can’t be scripted. That’s one reason he stays so relaxed in the ring. He remains present during the fight, allowing him to adapt his moves as the fight unfolds. Staying aware also helps him study his opponent in real-time and react efficiently to situations within the fight. His discipline helps him prepare, his focus concentrates his energy, and his present-moment awareness leaves him prepared for any move.