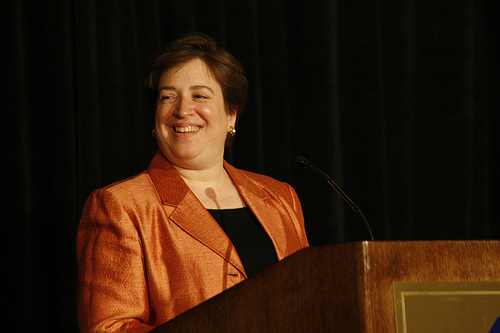 President Obama nominated Solicitor General Elena Kagan for a Supreme Court seat today. If all goes well for Kagan, she’ll be voted into the Supreme Court in July. We summed up 10 of the key things you should know about who Elena Kagan is, and what she might mean for the US Supreme Court:

– Kagan doesn’t have much judicial experience compared to the other current Supreme Court justices. She has no “public record on some of the hot-button social issues — such as abortion and gun control,” according to the Washington Post. Expect conservatives to highlight that. That said, Justice William Rehnquist, a conservative, came under similar scrutiny when he was nominated. Nearly 40% of all Supreme Court justices in the course of history lacked judicial experience (hat tip to Samantha).

– Kagan was Harvard Law School’s first female dean. If voted in, she would be the only justice not to have served as a federal appeals court judge.

– Kagan is young. At only 50 years old, she would be the youngest Supreme Court justice. She would also be the third woman, and the third Jewish justice.

– Kagan would replace the liberal judge John Paul Stevens. She would maintain the liberal ideological balance in the court, according to the Washington Post. Although we know little about her specific stances, she did advocate for homosexuals during her time at Harvard.

– Kagan is elite. Like most of the other Supreme Court justices, she’s from the East Coast (New York), went to an elite high school, attended Princeton, and then worked for Harvard and the government.

How Kagan would help President Obama

By all accounts, Obama wants someone who can serve as a counterweight to the intellectual heft of Chief Justice John Roberts. Regardless of how strong a liberal Kagan would prove to be, as a former dean of Harvard Law School, Kagan practically defines legal gravitas.

She’s also a female, which adds to the court’s gender diversity. She’s young, at 50, which means she could be on the court for a quarter century. And she’s never been a judge, which gives her a quality that Obama is known to have been seeking: someone to bring a different sensibility to a court that’s currently dominated by judges.

Kagan is also an insider. She has advised Joe Biden in the past and was Associate White House Counsel for the Clinton administration. She has served as a Supreme Court clerk. She was appointed to her Harvard Law School post by uber-insider Larry Summers.

She has the requisite ties with Goldman Sachs. Between 2005-8, Kagan served on Goldman Sachs Global Market Institute’s Research Advisory Council. (Unlike some other government officials, she received a paltry $10,000 for helping Goldman Sachs.)

Kagan is on Obama’s side about the campaign finance law preventing corporations from contributing to political campaigns that was overturned in January. The Baltimore Sun says that:

…the president made mention of only one legal issue that Ms. Kagan had worked on, and it happened to be the very one that Mr. Obama has publicly feuded with the Roberts court about. The president noted that the first case Ms. Kagan took up as solicitor general was the government’s side in FEC vs. Citizens United vs. Federal Election Commission, the campaign-finance lawsuit in which the court’s conservative majority threw out a century of precedent that had kept corporate money out of politics greatly restricted the presence of corporate money in politics. “I think it speaks to her commitment to defending our fundamental rights,” Mr. Obama said.

Finally, like Obama, Kagan has a reputation for being a consensus builder.