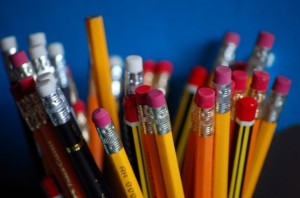 In mid-2007, I was downsized from my job working as a web editor for a major dining and tourism site. The layoff gave my ego a hematoma, but in practical terms, it wasn’t a big loss. When I factored in commuting and healthcare costs, the job was barely making me a profit.

Indeed, the gig I’d had before that–a full-time contracting position with an Internet startup–made me so little money that when I factored in rent, food, and insurance, the job was actually losing me a few hundred dollars a month.

Something was awry. After losing that second job, I realized that taking the leap from salaried employee to freelancer wasn’t as big a risk as I’d initially thought. After all, my two previous jobs had either lost me money or netted me too little to make a difference.

So, having no clue what to do, I jumped into the world of freelancing with both feet, a small startup savings account, a mortgage, and the panicked determination that comes from the fear of penury.

A friend had given me a place to start, a site called ELance.com. For a small monthly fee, I could put up a profile and bid for projects, eBay-style. I knew how to write a profile and enter a credit card number, so I did. Thus, my freelance career was launched.

After floundering around for a while, I did end up making some money, even winning a couple steady clients in the process. However, there were a few tricks I wish I’d known before diving in. Here they are, in no particular order:

1) When you browse Elance providers, you’ll see a list of prominent contractors in your field. Some of these people have made $100,000 or more. This list invokes envy and inspiration. They’re your competition–and Elance has ensured they’re loaded. You could be, too.

Right? Maybe. Bear in mind that ELance has been around since 1999. It’s more than likely that:

a) These people have been around just as long.
b) They have been working their butts off for that period of time.
c) They have a staff.
d) They work with the kinds of clients who give big, long-term contracts. In my industry, that would equate to ghostwriting a book ($10,000+) or writing a humongous website.

The big earners make ELance look extremely lucrative. It can be, but don’t be fooled. Lots of people make drops in the bucket. Some people make just enough to live off of. Others make a lot. It depends on your strategy and how much time you’re willing to devote to the world of ELance.

If you want to follow in the footsteps of your lucrative ELance forefathers, try contacting someone who’s not your competition and asking them how they did it. People are often willing to help out, especially if you’re not threatening their niche.

Take time to browse the project histories of successful people. What kinds of contracts did they have? What niche do they cover? How often do they do projects? What kind of feedback are they getting? Who are their clients? This will help you draft a plan for your own ELance success.

2) In the beginning, you may lose money. It’s a common practice to lowball when entering a new ELance market. Be prepared to either use up some of your savings or, if you don’t have anything saved up, live on credit for six months or so.

Lowballing is annoying, but if you’re diligent, this phase shouldn’t last long. Likewise, if you have bomber qualifications, you won’t have to do it in the first place. ELance competition is intense, global, and informed by feedback. At the beginning, good feedback is crucial, and if you’re lacking a solid track record, you might have to lowball just to land a contract. Consider it overhead.

3) Study potential clients carefully. Don’t just bid on any project that looks good. Look through your potential clients’ history and feedback ratings. Investigate the feedback your clients have left for other service providers. Sometimes you can get enough background information to see if this person is worth your time.

Use your gut, too. I had a bad gut feeling about one client, but decided to contract with him anyway. My strategy at the time was to take on as much work as I could in order to accumulate clients and build a history on ELance.

Unfortunately, communication with this client was bad from the beginning. I turned in my project before it was due. He sent back a few revision notes. I immediately fixed them. This is typical for the writing industry: Writer writes, editor sends back feedback, writer revises. Unfortunately, this client thought that I should have done it perfectly the first time around, so he gave me a poor rating on ELance.

I was shocked and dismayed for about a week. Finally, I researched the issue of poor ratings, and found that even the most lucrative of ELancers had a few lemons here and there. They’re inevitable. However, you can mitigate the number you get by researching who you’re working for before accepting a project.

4) If you’re located somewhere with a high cost of living, know that low bidders won’t kill you. For example, ELance has a large number of talented, English-speaking Indian providers who will undercut your bid by frightening amounts of money. Their cost of living is lower, so they can afford to do it.

For projects where low cost is the biggest priority, you won’t even be in the running. However, different clients have different needs. You could have a locational advantage (no 12-hour time difference). You could provide the kind of quality and communications that cheaper providers don’t bother to give. You could offer value-added services, such as additional improvement suggestions for your client’s project.

Think of what you can give that differentiates you from fast and cheap. That mentality will win you bids.

5) Be very patient. There’s a paradox around ELance. On the one hand, you can instantly win projects, turn them around in a couple days, and get cash deposited right into your account. No commuting, no meetings; oftentimes, you don’t even have to call clients.

On the other hand, your success will hardly be quick and easy, unless you’re lucky. Not all bidders actually have projects to provide–some just want quotes. Not everyone wants what you have to offer. And a good bid takes time to compose. Sometimes, your time investment hardly seems worth it. This is when things get frustrating.

When I started on ELance, I put down a hard-and-fast rule for myself. I would find five projects a day to bid on, write down intelligent bids, lowball, and hope for the best.

That strategy got me a modest start on ELance. But it was a panic strategy, not a rational one. The strict self discipline helped me feel like I was making progress. It also built me a track record of $200 projects–short, fast, low profit margin.

It was the same niche low-cost providers love to specialize in. That kind of market usually doesn’t get you on the vaunted $100,000 provider list. If I could start over, I’d take a couple of days to draft a solid, redundant strategy using three solid skill sets. For example:

Plan A: Write SEO-friendly websites for clients with 2-week to 1 month turnaround times. Try this for two months. If I don’t make at least $1,500, divert to Plan B.

Plan B: Target Web ad and marketing clients with copywriting projects. Offer proposals to people looking for AdWords campaigns, product descriptions, and company websites. If this doesn’t net me X amount in a month, divert to Plan C.

Plan C: Write blogs for people. Target clients looking for quality, not linkspam schwag. If this doesn’t net me X among per blog, re-draft strategy.

I would have adapted the strategy as I gained experience, but left the basic template in place to remind myself that though my niche may evolve, I command the direction I want to take. I would have been flexible, but with standards.

Considering how panicked I felt when I started freelancing, I also may have developed a drinking problem. It’s hard to keep a cool head without experience on your side.

One final note about ELance. It’s a source of income, but not an end-all. Most freelancers diversify. A freelance writer, for example, can target print media (magazines and newspapers), websites, and corporations. Her income could come from all three.

If one client or market falters, have another in mind. You’ll be able to steady your income–and your sanity–by incubating several different sources.