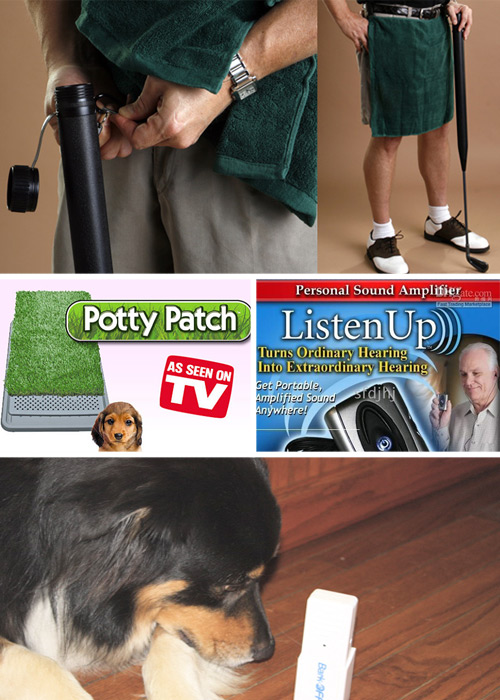 If you’ve ever been stuck at home during the day, The Price is Right has already come and gone, and you weren’t desperate enough to watch General Hospital, odds are you saw quite a few “As Seen on TV” ads.  Some of these products seemed genuinely useful in the alterna-world of infomercials where people seem incapable of opening jars or hanging clothes without a specialized tool.  Hell, some of us even bought one or two of these products (I love you, Slap Chop).  But God help you and have mercy on your progeny if you were the type of person who impulsively bought these things that initially seemed useful, and then later you still thought were useful — because you are obviously mentally ill.  The rest of us, however, should stay away from some of the worst of these products, things like: 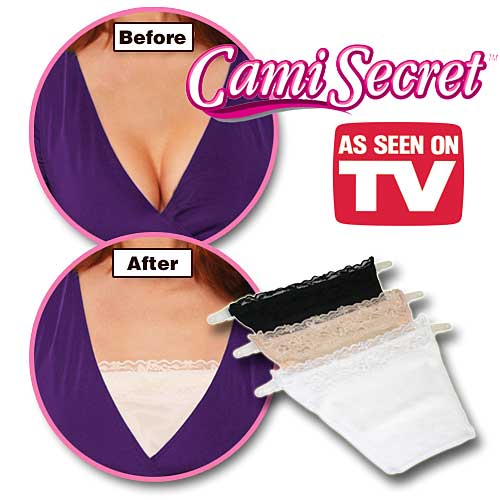 Famously known as The Boob Apron, the Cami Secret is the only as seen on TV product that could potentially ignite World War III if it ever saw widespread use.  This is due to the fact that oogling tits comprises somewhere in the neighborhood of 60-100 percent of a man’s daily happiness.  Ask a (straight) man whether he’d rather live in a war-torn post-apocalyptic hellscape, or live in a world without boobs, and you will understand the fragile underpinnings that hold society in place that the Cami Secret is trying to make even more flaccid.

Fortunately for men, women and the future of humanity in general, the Cami Secret is not only a terrible idea, it’s a straight-up shitty product.  In an Internet where the average rating is 4.4-5.0+++!!!!OMGWOULDBUYAGAIN, the Cami Secret nets a kiss-of-death three stars on average at Amazon.  Browsing through the comments, it seems like the most common review consists of “This product works really well as long as I don’t do anything but sit perfectly still all day”.  Though perhaps men shouldn’t hate on the Cami Secret so much, given its tendency to slip out with the slightest gust of wind.  After all, experts speculate that the remaining 40 to 0 percent of men’s happiness that is not derived from boobs, comes from secretly rooting for nip slips. 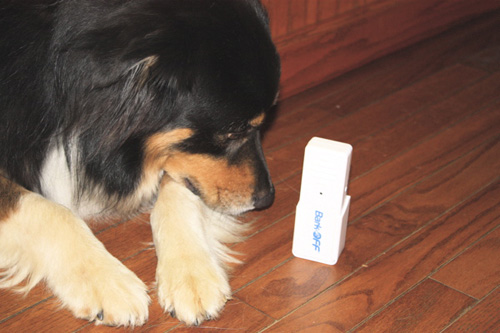 Designed for people who hate their dogs and also like to kick kittens and small children (allegedly), the  Barkoff emits a high-pitched whistle every time it detects a bark.  Sort of like the canine version of Dr. Evil’s “sh!”, this is supposed to aggravate and annoy your pet into silence.  However, to be fair, those of us who’ve lived next door to someone with a yipping little hellspawn would approve this wailing banshee of product as a just and humane response.

Or we would, if it worked.  At all.  A quick browsing of the aggregate reviews nets a bunch of one-star reviews and one or two five-star reviews.  To those of you who are unfamiliar with the Internet or statistics, this likely means the positive reviews are fake, or at the very least, heinously illiterate (“Makes dog queit”; “wonderfal nothing to change nothing to worry about”).  Even the semi-positive reviews where the Barkoff actually worked, noted that it drained 9 volt batteries at the rate of one every 2-3 days.  To put it in perspective, the 9 volt battery in your smoke detector can easily last 6 months. 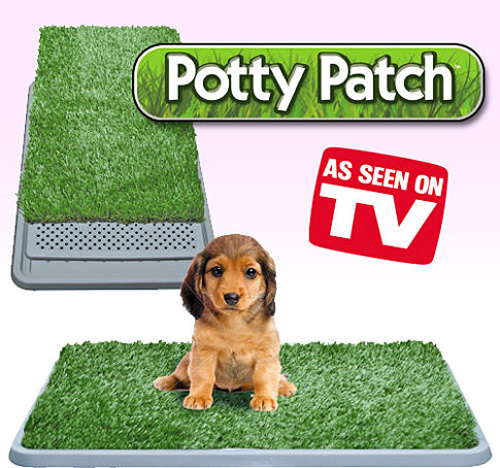 Along with Barkoff, the Potty Patch follows in a long tradition of terrible products for terrible people who should never own pets.  The idea here is that the Potty Patch allows owners to potty-train their dogs without ever having to walk a couple of feet to go outside or possibly (shudder) meet another person.  The Potty Patch video brags that this over-glorified carpet square is super-absorbent and can hold up to a quart of water.  It also has the “natural feel and smell of real grass”.  Which totally misses two important points: 1. Dogs expel waste in two ways, 2. It will not smell like grass for long.

But whatever, for those horrible people than own small dogs with bladders the size of thimbles, the Potty Patch provides a convenient alternative to taking your yapping terror out in the freezing cold every 30 minutes.  That would be a convenient fix, if only, according to the reviews, dogs didn’t hate the thing, refuse to use it, and the stench of urine didn’t become overwhelming and fill the entire house after one use.  The Potty Patch feels like one of those good ideas that was invented by one person with a lot of supportive friends and family who didn’t have the good sense to mention that he or she was basically inventing a giant poop and piss patch. 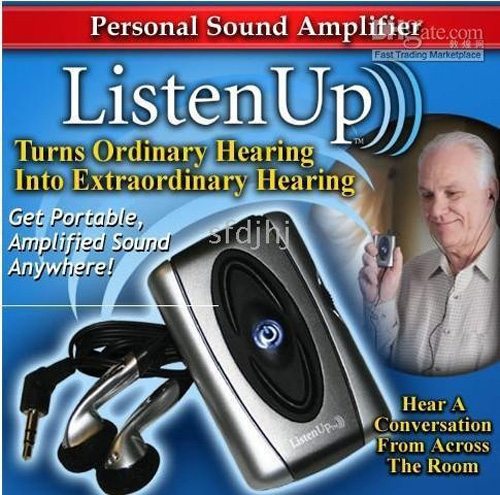 The nerd in all of us that has never given up on the dream of being James Bond looks at the Listen Up sitting on the shelf at the local convenience store and instantly is filled with fantasies of fast cars, loose women and even looser physics.  The Listen Up makes a passing attempt at being a cheap and dirty hearing aid for the impaired, suggesting that you use it to watch TV with the volume turned low (for everyone else’s comfort).  But then it very obviously hints at the fact that you can amplify conversations up to 100ft away.  The whole point of conversations is that, if you are meant to be in one, the other person will not be 100ft away.  So this is a spy/stalking device pure and simple, it’s even disguised as an…MP3 player? so no one will know you are creepy/trying to prevent the assassination of the president.

If you have even a cursory understanding of physics, you’ve probably already figured out that the Listen Up will not actually allow you to listen in on your neighbors/suspected terrorists.  For that you’d need some sort of device to capture sounds coming from that specific direction, to the exclusion of all others, or something like this.  Not that it’s impossible to build a device this small that can do that, but you’re not going to get it from $9.99 if you call in the next 10 minutes.

Unfortunately, the Listen Up merely amplifies all sound like a poor, grainy hearing aid.  Not only that, the Listen Up has a slight delay, meaning that if you want to use it to watch TV at a low volume (one of its repeated selling points), all you’re going to get is an earful of whooshing noises and a noticeable echo. 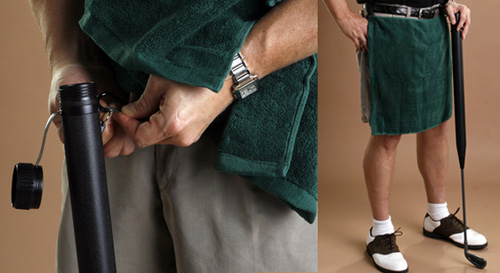 This may seem like a strange way to begin a paragraph but: come on guys, we all wish we could just piss in a bottle and not pause our video game/lying in bed feeling the crushing weight of existence/Mythbusters marathon to get up and use the bathroom, but we’ve all agreed that it’s really “super gross”.  The UroClub seeks to undermine this last, fragile bastion of civility left to the modern bachelor by acting as a tube you can pee into while golfing.  Take a moment to let that seep in.  Or maybe seep isn’t the best word.  Soak in.  No, shit. Okay let’s just keep going.

If you have any remaining shred of sanity and/or decency, your mind right now is filled with one word and one word only: “Why?”  If not, I am very sorry for every who knows you, and as a service to them let’s review some basics about this product.

First: It is a tube that you pee into when out on the golf course and no bathrooms are nearby. This sounds convenient and discrete until you realize that you still have to undo your fly and pee into a tube, instead of, you know, some bushes like any other self-respecting man.

Second: Are you supposed to golf with this?  If not, why not just bring a tube that you don’t swing at high velocities over your head?

Third: Golfing takes hours to complete, and temperatures are often high.  You are driving around the course with a hot, fetid, tube full of urine riding shotgun.
No word from the manufacturers on what happens when the tiny UroClub tube goes into an overflow situation, though most speculate it would be something like “Jesus just go in a bush you pussy”.