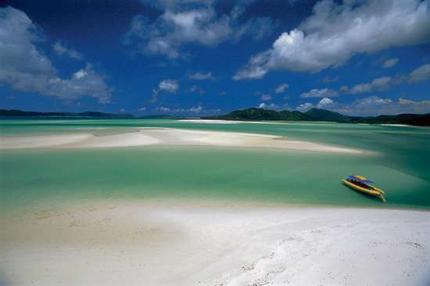 The AFP reports on Australia’s attempt to pull in tourists by offering “the best job in the world”:

An Australian state has launched a global search for candidates for “the best job in the world” — earning a top salary for lazing around a beautiful tropical island for six months.

In return, the “island caretaker” will be expected to stroll the white sands, soak up the sun, snorkel the reef, “maybe clean the pool” — and report to a global audience via weekly blogs, photo diaries and video updates.

(An official) said the campaign was part of a drive to protect the state’s 18 billion Australian dollar a year tourism industry during the tough economic climate caused by the global financial meltdown.

Candidates can apply until February 22 at this site: http://www.islandreefjob.com/en/.

The island is called Hamilton Island, and it is located on the Great Barrier Reef.

It looks like the bad global economy gave even more economic potential to the online publicity machine. In better days, this news would have been anecdotal. Now, people are taking it really darn seriously. Understandably, the website has been down for a while.