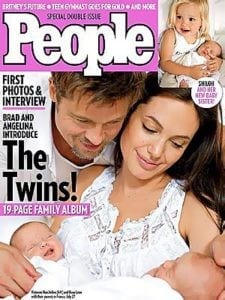 Million dollar baby photos have been all the rage since Angeline Jolie brought a pair of ultra-hot, hyperprivileged twins to the world. Santa Angelina usually gets a break from intense media scrutiny, as she and stud hubby Brad Pitt donate exorbitant amounts of cash to needy global causes.

What about the rest of celebrities who’ve jumped on the baby picture pimping bandwagon? Did they need the money? Or did they just want to gaze at photos of themselves on People magazine?

Below is a list of the ten best-grossing baby pictures of all time. I listed net worth information beneath the baby’s price tag. See for yourself where each couple rates on the morality meter:

Morality rating: Good. Proceeds from the photos were donated to the couple’s Jolie/Pitt Foundation, which so far has pledged at least $7 million to various nonprofits. The couple has set a precedent for charity, which puts them in acceptable moral territory when it comes to pimping babies.

Morality rating: Poor.J-Lo’s got hundreds of millions. What does she need another $6 million for? She needs to save face by assigning a morally acceptable destination to the money.

Morality rating: Good. Proceeds were supposedly donated to an undisclosed charity, making this another case of baby pimping for nonprofit.

Morality rating: Poor. I couldn’t find a net worth on McConaughey, but with films that gross around $44 million on average, he can’t be doing bad. Brazilian model Camila Alves isn’t exactly eating out of the dumpster, either.

Morality rating: Average. I couldn’t find evidence that these funds went anywhere but into their sizable bank accounts. Still, the couple are off the hook for granting a poor orphan a life of excess.

Morality rating: Heinous. DNA daddy Larry Birkhead, who doesn’t have the means to procure cash on his own, uses photos of motherless Danielynn to prop up his swanky lifestyle.

Morality rating: Poor. Aguilera hasn’t done much in the past few years, but she sure has appeared in a lot of photo shoots. Baby Max is following suite.

Morality rating: Heinous. Between this teenage mom and her sister, every moral mishap, from teenage pregnancy to maternal abandonment, has pretty much been addressed. In pure capitalist terms, however, pimping the baby might have helped out.

Morality rating: OK. Richie just added significantly to her net worth by pimping her baby. She also proves to anorexics everywhere that very expensive prenatal care can get you a healthy child.

For those of you aching with jealousy, there’s hope. SugarMatchMaker hooks up sugar mommies and daddies with those who need them.

What do you think of celebs selling their baby pictures? Is it OK, because the paparazzi would be snagging the shots anyway? Or is it pure greed?