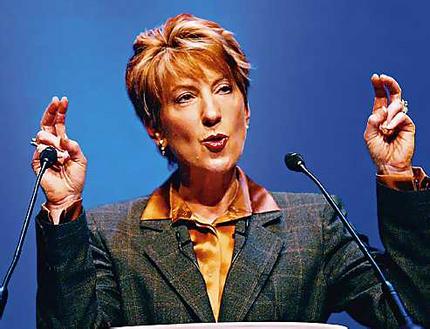 Former Hewlett Packard CEO Carly Fiorina announced that she will run for Senate in California today. The Washington Post has more:

“Throughout my career I’ve brought people together, and I’ve solved problems,” wrote Fiorina in an editorial in the Orange County Register today. “And that is what is needed in our government today. People who are willing to set aside ego and partisanship and instead work to develop solutions to our problems.”

On paper, Fiorina gives Republicans their most serious candidate against Sen. Barbara Boxer since 1998 when then state Treasurer Matt Fong (R) held the Democratic incumbent to 53 percent.

As a successful businesswoman, Fiorina presents a significant contrast to Boxer who has been in elected office in California since 1976. And, Fiorina’s personal wealth means that she can fight Boxer dollar for dollar in a state where money (and the television ads it buys) is absolutely critical. Fiorina does start far behind Boxer in the money chase, however, as the Democrat showed more than $6 million on hand at the end of September.

One California Republican strategist acknowledged that Fiorina “has a long way to go” in terms of viability but quickly added that her profile, her personal wealth (assuming she spends some of it) and Boxer’s controversial persona means that the Republican will likely stay within shouting distance of the incumbent through next summer and fall.

If Fiorina’s HP legacy has any bearing on her ability to be a successful political leader, this doesn’t bode well. That said, many people have become politicians after unusual careers (especially in California). And in politics, dogma and money override past mistakes. It’s not about ability to govern, it’s about the ability to get votes.

This will get interesting.