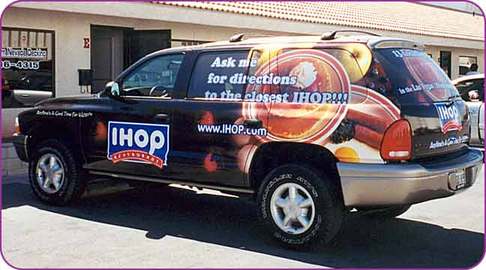 Several years ago, getting paid to drive a brand-wrapped car was bordering on popular. The trend later fizzled, but, thanks to the recession, branded “free cars” could be making a comeback. Matzav.com details how it works:

Here’s the basic premise of the “paid to drive” concept: A company seeks people — regular citizens, not professional drivers — to go about their normal routine as they usually do, only with a big ad plastered on their car. The ads are typically vinyl decals, also known as “auto wraps,” that almost seem to be painted on the vehicle, and which often cover a large portion of the car’s exterior surface.

The car owner is then compensated, usually a few hundred dollars per month, which is essentially a “rental” payment for letting the company use that space. In the past, there’s also been a “free car” version of this concept. The company provided the driver with a new, prewrapped car. In this situation, the drivers usually didn’t get any cash; their payment amounted to the free use of a new car. However, companies quickly discovered that giving away a bunch of free cars didn’t make economic sense, so few still take this approach, says Drew Livingston, president of Free Car Media in Los Angeles.

What does the company get out of this type of ad strategy? Lots of exposure. The auto wraps tend to be colorful and eye-catching and attract lots of attention. Plus, it’s a form of advertising with a captive audience, meaning people who are stuck in traffic and can’t avoid seeing the wrapped car alongside them, Livingston says.

The companies usually select drivers who live in desirable locations such as high-traffic, urban areas. A company’s ideal driver can vary depending upon the target demographic they want to reach, according to Brandon Clarke of DrivenMedia, a Phoenix-based advertising company that specializes in creating branded vehicle campaigns for clients. For example, a tech or electronics company may seek drivers who live on or near college campuses, so as to gain exposure with the college crowd.

Companies may also track drivers’ locations via GPS. That way, they ensure that drivers spend enough time in desired areas, according to the article above.

How do you sign up? FreeCar Media, one of the major suppliers of branding services, explains the process for its cars:

Advertisers choose the drivers they want based on the information you provide us. When you are chosen, your vehicle will be wrapped in an attractive advertisement and you will get paid up to $900 a month. Most programs average 3 months but some are longer and others shorter.

The more information we can give advertisers about you, the easier it is for them to choose you. So please be as detailed as possible. So, take a little time to fill out the application and we’ll do our best to put you in the driver’s seat.

Note that you probably won’t get a free car. Instead, you’ll sacrifice your existing vehicle to the advertising gods for a few months, and receive a nice little paycheck in return. From the sounds of it, moms are a choice target this time around. “With active families being such a coveted demographic, incorporating their vehicles is ideal since they’re getting tremendous exposure parked in the pick-up line at school, at the Saturday morning soccer games, etc,” says DrivenMedia’s Brandon Clarke, as quoted in the Matzav article.

If you’re interested in signing up, go to Drivenmediaonline.com or FreeCarMedia.com. Avoid sites that try to charge you a fee to sign up. These sites may try to scam you.

Update: We don’t work for these companies, so unfortunately, we can’t help you land a car-wrap gig with them. Please follow the links above to find out more on how to get a job with them.