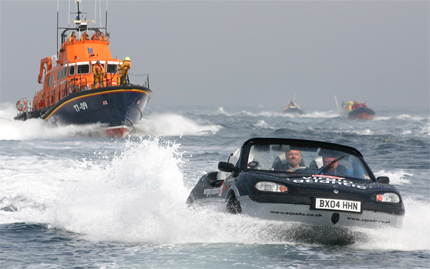 The Gibbs Aquada car, an amphibious car that turns into a boat, will be coming to the US in 2011.* The Aquada acts like a normal convertible until you drive it to the edge of the water. At that point, you push a button, drive into the water, press the gas, and, in 12 seconds, have a boat capable of going more than 30 mph, according to the Gibbs website.

I haven’t found information on how much the Aquada will cost. People are claiming $85,000-$100,000 online. I bet the super-rich and boat fanatics will pay whatever premium Gibbs puts forth–the vehicle’s James Bond-like qualities make it a sure winner during lake vacations.

Even if Aquada is water skier-friendly, you’ll probably need a boat license. That’s what got the prototype model pulled over by an Oakland County sheriff after Gibbs did five demo runs here on Pine Lake in southern Michigan—thus legally ending our shot at a water test drive. Other than that, though, the company says this boatmobile is unsinkable, even if it’s swamped in.

http://www.eurekamagazine.co.uk/article/17937/Innovatory-challenges-to-get-out-of-the-recession.aspx
In March 2004, Branson made the fastest crossing of the English Channel in an amphibious vehicle, a Gibbs Aquada, in 1h 40m 6s. The previous record was six hours.