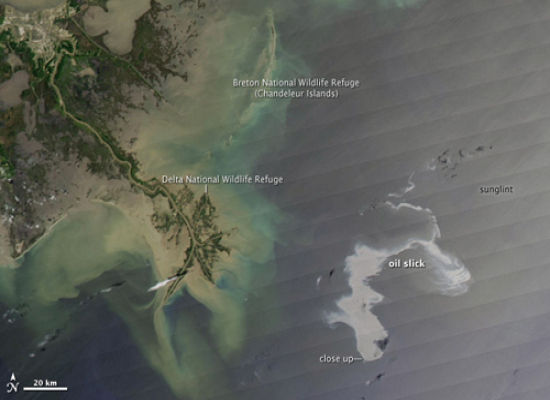 Ever since the Deepwater Horizon oil rig blew up last week, BP, which was leasing the rig, has been trying to control the Gulf oil spill. The 1,000 workers, 5 planes, robotic submarines, and 32 ships the company deployed are costing them more than $6 million/day. BNET’s Kristen Korosec has more:

This time, the stakes and potential fallout aren’t just big for BP, but the rest of the offshore drilling industry as well. An estimated 1,000 barrels of oil a day are leaking from the BP well located some 5,000 feet under water. The spill, as of Tuesday, was 21 miles from shore, U.S. Coast Guard Rear Adm. Mary Landry said during a press conference. This could be the most significant spill in recent history if the well isn’t secured, Landry said.

…the oil company is going to shell out a lot more before it’s over because the stakes for the environment, its own reputation and the industry are higher than ever. Drilling a second well to plug the leak, an option BP is pursuing, will cost an estimated $100 million.

BP understands that a dollar (or $6 million) spent today means considerable savings tomorrow. Environmental cleanup costs, which BP is responsible for under the Oil Pollution Act of 1990, will skyrocket if the oil spill reaches the shoreline.

That’s not to say BP can simply spend its way out of this mess. BP will still have to answer to the numerous government agencies overseeing the spill. How BP handles itself in this crisis will give investors and the public the clearest indication yet of whether it’s a new, safer and more responsible company or the same one we saw back in 2005.

After a 2005 refinery explosion in Texas City killed 15 workers and hurt hundreds of others, BP plead guilty to felony charges in a US court. The company admitted to “failing to have adequate written procedures for maintaining the ongoing mechanical integrity of process equipment at the Texas City refinery and for failing to inform contractors of the hazards related to their occupancy of temporary trailers in the vicinity of the refinery’s Isomerization Unit.” The court fined BP $50 million and a 3-year probation. OSHA fined BP an additional $21 million, and the company paid out $1.6 billion to the victims of the fire. It also had to upgrade its flares to new government standards, for a price of $250 million.

Mistakes don’t come cheap in the oil industry. No wonder BP is spending so much money trying to stop the oil from hitting the shore (the Coast Guard may lend a hand by burning the oil).

BP–and the entire offshore drilling industry–may also be in political hot water. From the Houston Chronicle:

The incident has in recent days led opponents of offshore drilling in Congress to seek probes on industry safety. On Tuesday, the Interior and Homeland Security departments said they are investigating through a joint agreement between the Coast Guard and the U.S. Minerals Management Service. Meanwhile, the number of lawsuits from accident survivors and the families of deceased workers is growing.

Byron Grote, BP’s chief financial officer…note(d) that Transocean, as the owner and operator of the Deepwater Horizon, is generally responsible for the rig itself, safety equipment on the sea floor and the drilling of the well. BP, as the owner of the offshore lease where the rig was working, is responsible for regaining control of the well and for the costs of the environmental cleanup, he said.

The Coast Guard…said while the effort was making progress on several fronts, “we’re probably 90 days out from securing this source permanently.”

Though largely overshadowed by questions about the offshore disaster, BP said its first-quarter profit more doubled on higher oil prices. Net income jumped to $6.08 billion from $2.56 billion in the same period a year ago, beating analyst expectations, while revenue rose to $74.42 billion from $48.09 billion.

The 40-mile-wide oil slick is now reported to be 15 miles away from Louisiana. A new drilling rig was moved into place yesterday, according to NPR. Once BP secures the right permits, it will drill a new adjacent well to redirect the oil. NPR also reports that “BP is building one of the largest pollution containment devices ever constructed which will be placed over the leaking well. It will capture the oil as it escapes and pump it safely to oil tankers on the surface, but that will take weeks to put in place and become operational.”

Considering the fallout it faces, it’s safe to say that BP is trying its best to contain the Gulf Oil spill. BP’s costs, of course, don’t factor in the massive environmental damage that the oil slick will cause Southern wetlands and beaches once it migrates to shore. That, I imagine, will mostly affect taxpayers.