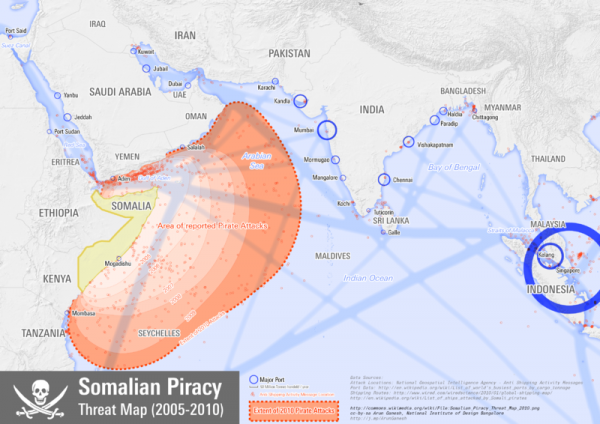 Four Americans have been killed by Somali pirates off the Horn of Africa. Jean and Scott Adam were a retired LA-area couple who had been sailing around the world since 2004. Their Seattle friends Phyllis Mackay and Robert A. Riggle were also on board when the pirates struck. From the New York Times:

The Americans…were sailing on their 58-foot yacht for the tiny nation of Djibouti to refuel when they were hijacked several hundred miles off the coast of Oman on Friday afternoon.

A Navy warship had been shadowing the yacht, called the Quest, since Saturday. The pirated vessel appeared to be moving towards the Somali coast in the days before the confrontation, The Associated Press reported; once pirates reach shore with hostages, options for a rescue are extremely limited.

American officials had opened a channel of communication between the pirates’ financier as well elders from their village to help negotiate the hostages’ release. “There was a dispute about money and the situation went south quickly,” said one American official involved in the discussions.

The adventurous Americans, who were reportedly experienced and prepared for the risks of sailing in the area, fell victim to Somalia’s governmentless politics. Somalia hasn’t had a central government since 1991. But the pirates, which run their multibillion dollar economy on overt theft, are flexing their power muscles just like any other governed state would. The AP discusses the likely motives the pirates had for killing the American couples on board:

Pirates hijacked the yacht Quest on Friday, two days after a Somali pirate (Abduwali Abukhadir Muse) was sentenced to 33 years in prison by a New York court for the 2009 hijacking of the Maersk Alabama. That case ended in a spectacular rescue when Navy sharpshooters killed two pirates holding the ship’s captain, Richard Phillips.

…the prison sentence given to Muse this week could have implications for the four American hostages. Pirates have turned increasingly violent in their attacks, and naval officials say pirates have begun systematically torturing hostages and using them as human shields.

Earlier this week a pirate told an Associated Press reporter in Somalia that pirates would target Americans in retaliation for the sentencing. The pirate, who identified himself by the name Hassan, said Americans would suffer “regrettable consequences.”

Pirates are holding an additional 30 ships and 660 hostages right now, writes the AP. “A recent US study found that maritime piracy costs the global economy between $7bn and $12bn a year,” according to the BBC.

Somali piracy has become big business over the years. Even military coordination, private mercenaries, and private security forces on US ships haven’t made much of a dent.

It helps the pirates’ cause that most of the population supports them. “70 percent (of Somalis) ‘strongly support the piracy as a form of national defense of the country’s territorial waters,'” according to this Project Censored story:

Back in the 1990s, the pirates started out as “ordinary Somali fishermen who, at first, took speedboats to try to dissuade the dumpers and trawlers, or at least wage a “tax” on them. They call themselves the Volunteer Coast Guard of Somalia.

One of the pirate leaders, Sugule Ali, explains that their motive is “to stop illegal fishing and dumping in our waters. . . . We don’t consider ourselves sea bandits. We consider sea bandits [to be] those who illegally fish, and dump waste, and carry weapons in our seas.”

The international community has come out in force to condemn and declare war on the Somali fishermen pirates, while discreetly protecting the illegal, unreported and unregulated (IUU) fleets from around the world that have been poaching and dumping toxic waste in Somali waters since the fall of the Somali government eighteen years ago.

The Independent has more on the pirates, who, while partially comprised of gangsters, also have a contingent of ex-fisherman on a mission:

In 1991, the government of Somalia collapsed. Its nine million people have been teetering on starvation ever since – and the ugliest forces in the Western world have seen this as a great opportunity to steal the country’s food supply and dump our nuclear waste in their seas.

Yes: nuclear waste. As soon as the government was gone, mysterious European ships started appearing off the coast of Somalia, dumping vast barrels into the ocean. The coastal population began to sicken. At first they suffered strange rashes, nausea and malformed babies. Then, after the 2005 tsunami, hundreds of the dumped and leaking barrels washed up on shore. People began to suffer from radiation sickness, and more than 300 died.

Ahmedou Ould-Abdallah, the UN envoy to Somalia, tells me: “Somebody is dumping nuclear material here. There is also lead, and heavy metals such as cadmium and mercury – you name it.” Much of it can be traced back to European hospitals and factories, who seem to be passing it on to the Italian mafia to “dispose” of cheaply. When I asked Mr Ould-Abdallah what European governments were doing about it, he said with a sigh: “Nothing. There has been no clean-up, no compensation, and no prevention.”

At the same time, other European ships have been looting Somalia’s seas of their greatest resource: seafood. We have destroyed our own fish stocks by overexploitation – and now we have moved on to theirs. More than $300m-worth of tuna, shrimp, and lobster are being stolen every year by illegal trawlers. The local fishermen are now starving. Mohammed Hussein, a fisherman in the town of Marka 100km south of Mogadishu, told Reuters: “If nothing is done, there soon won’t be much fish left in our coastal waters.”

It would be smart politics to address the pirates’ motivations, perhaps even do something about the dumping and overfishing issues. The more likely response, however, will involve more people with guns.