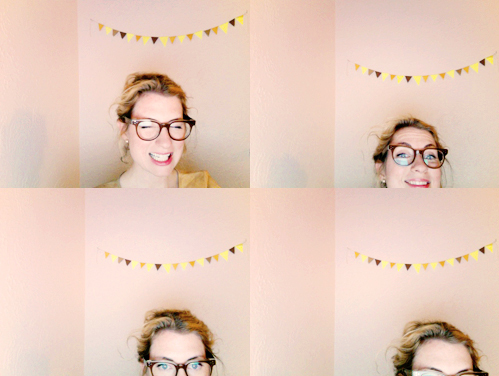 Sometimes you have to be hard on yourself in order to save money. Anna Newell Jones should know. At the beginning of 2010, Jones, fed up with her prodigious spending habits and mountain of debt, decided to go on a “Spending Fast,” which she documented on her blog, And Then She Saved.

That meant no spending on anything except necessities, including her mortgage, car payments, and utilities, for an entire year. She denied herself new clothes, hair cuts, eating out, movies, and more (see her full list of self-negation here). The only luxury Anna allowed herself all year was hair dye–she is a professional photographer and needs to look good for clients.

What did Anna get for her 365-day foray into financial asceticism? More than $13,000 in savings. No more credit card debt. Much less student loan debt. And, perhaps best of all, a better way of managing money.

Despite her pain and suffering–or perhaps because of it–Jones serves as a personal-finance inspiration for 2011. I caught up with her to talk more about her project, her accomplishments, and what she plans on doing next.

BP: Can you list your five biggest accomplishments for your year of saving in 2010, starting with the biggest?

Wow! There have been so many accomplishments this year.

#1 is definitely that I met my main goal of eliminating all of my consumer debt. I never thought that would actually happen and it was the driving force behind deciding to go forward with the Spending Fast in the first place.

2. Paying off my parents. They took out a college loan for me years ago and I had been trying to get it paid off forever and I could never seem to make a dent in it until this year when I did the Spending Fast. Actually getting them paid off is such a huge weight off me emotionally and mentally that I’m just beyond overjoyed to have that debt wiped out.

3. Learning to say “No” to myself and that learning that just because I have money doesn’t mean I should buy whatever I want.

4. Learning the concept of “Enough”. Before the Spending Fast I was never satisfied with what I had or did because I was always trying to have and get MORE, MORE, MORE… my wants were completely insatiable. I would compare myself to others and could never be satisfied since there was always something new that I needed to make me and my life perfect. Because of the Spending Fast I’ve found that I can get by with a lot less and be okay with it.

5. Lastly, starting and actually completing the Spending Fast for an entire year is pretty huge accomplishment. I’m kind of shocked and amazed that I actually did this for an entire year! Did I really just not spend money, except on necessities, for a whole year?! It’s crazy to think that I really pulled this off.

BP: What was the hardest part? What about the easiest part?

The hardest part of the Spending Fast was the beginning. I had to force myself to get used to a completely new and foreign way of thinking about money and spending and saving and debt re-payment.

There were some rough moments there for a while, and I knew I would’ve given up on the whole idea if I wasn’t being held accountable by the blog I had started to document my year with the Spending Fast.

Knowing that I had to write about any failures made me work even harder at doing well because I didn’t want to write that I had messed up. It was also surprisingly hard at certain points to decline on some things because of the Spending Fast and then have people offer to pay my way or pay for my dinner so I could participate. Those situations were a little awkward. I had to explain that I chose to do this and I was going to deal with the good, the bad, all of it.

BP: What are the main things you learned? Will you take any of them with you into the future, or do you think you’ll eventually just revert to your old habits?

I’ve learned so many things. I found that I had to want to be out of debt more than I wanted whatever item I had my eye on. As I mentioned earlier, learning to say “No” to myself has been very powerful and I learned that I can be okay with having less. I’ve also learned that having everything I want is not all that amazing and that I’d rather be doing other things than maintaining, managing and caring about things that I own. I’ve got better things to do with my time! I have learned throughout this year that I am very industrious and that once I set my mind to do something I will do it. I learned that I can make zombie portraits and people will actually pay me for them (www.etsy.com/shop/annanewell). That is very awesome.

I’ve also learned that getting that first credit card paid off was an amazing feeling. Getting that first card knocked out encouraged me to keep going. There is no doubt in my mind that I will take what I’ve learned this year with me into the future.

There’s no way I could go through an experience like this and not have it affect me. Though, I have to admit I have been panicking that once the Spending Fast ends I will become possessed with some wild spending craze and go buck wild again. I hope that doesn’t happen and doubt that it will.

Throughout this whole past year, I have been creating new habits regarding money and spending and my financial life. Now my finances are in the best spot they’ve ever been in before. I won’t let myself get into trouble with money like I did in the past. I can’t go down that road again. I won’t let the year long Spending Fast be for nothing.

In 2011 I plan on doing a modified version of the Spending Fast. It will be a Spending Diet and it will be quite a bit less extreme. I still have a college loan hanging over my head and I plan on wiping that out as soon as possible. Getting funds into a savings account and investing are some of my other goals for this upcoming year. I will continue to write on my blog And Then She Saved, since I’ve found that accountability so beneficial.

BP: Can you share any advice for people who want to get out of debt?

I would recommend starting by cutting out one thing a week. Maybe it’s making a gift rather than buying one or wearing something to an event that you already own. Change one thing per week and just keep adding healthy spending/saving habits in there. It is a process.

Money and spending and saving have so much symbolism for so many people and it taps into the priorities and values that we each hold for ourselves. Changing those ideas about money is not something that happens overnight.

I also highly recommend going on a Spending Fast for a couple of months or for even just a month, if not for a whole year. In a lot of ways my life has been re-calibrated because of the Spending Fast.

Anna Newell Jones is a freelance photographer based in Denver, Colorado who shoots a lot of conceptual gallery work. She’s married to a fellow photographer and they travel all over the United States shooting weddings. She started a year-long Spending Fast in January 2010 along with an accompanying blog to document her progress and setbacks throughout the year. Because of the Spending Fast, she has managed to save $17,911.89 in one year and get completely out of consumer debt.