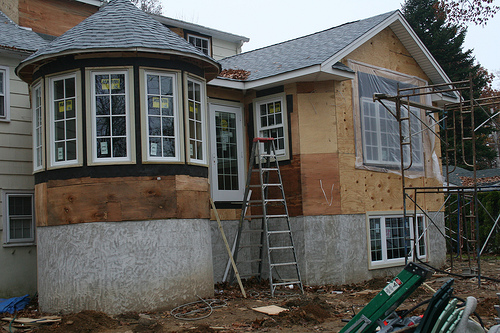 Cash for Caulkers, a new government incentive program, will offer homeowners a 50% rebate on weatherization projects. CNNMoney has more on the program:

The program contains two parts: money for homeowners for efficiency projects, and money for companies in the renewable energy and efficiency space. The plan will likely create a new program where private contractors conduct home energy audits, buy the necessary gear and install it. Big-ticket items like air conditioners, heating systems, washing machines, refrigerators, windows and insulation would likely be covered.

Based on earlier bills, consumers might be eligible for a 50% rebate on both the price of the equipment and the installation, up to $12,000. So far, there is no income restriction on who is eligible. That would mean a household could spend as much as $24,000 on upgrades and get half back. Homes that take full advantage of the program could see their energy bills drop as much as 20%. The program is expected to cost in the $10 billion range.

Obama’s new spending plan also calls for renewable energy companies to get additional support. That could come in the form of loan guarantees – basically, money the government uses to secure loans for startups. In the original stimulus bill passed earlier this year, $6 billion was earmarked for such loan guarantees. But then lawmakers took away $2 billion to fund Cash for Clunkers – the popular program that paid people to turn in their old cars.

Energy-efficient homes help reduce aggregate national energy use. Ideally, we won’t import as much fuel, contribute to a reduction in carbon, and have more money in our pockets every month. Contractors will experience a temporary surge in business.

But I’m dubious. Here are my reasons:

1) When the government drives consumer purchasing incentives, they don’t always work. Did Cash for Clunkers work? Not really, seen this way. Could the government be putting its budget into something more effective and efficient than this, or benefit populations in more dire need?

2) If loans aren’t being offered, how will consumers come up with thousands of dollars in cash to pay their half? Most people don’t have a few thousand to contribute to weatherization, unless they were planning it anyway.

3) It’s easy to commit fraud under the catch-all phrase “weatherization.” Contractors can go in and say anything is weatherization, even if it doesn’t fit the government’s criteria. So can homeowners.

4) It would be more effective to weatherize commercial and government buildings, too. This was something Bill Clinton proposed, but it didn’t go through. If Cash for Caulker’s main focus is to reduce carbon emissions, are homeowners really the best group to target? If CforC’s main focus is to stimulate the economy, how much stimulus will really occur long-term, since not every homeowner will sign up, and contractors will only experience a temporary surge in business?

I hope that the Cash for Caulkers experiment works. I can see it working well in a government with slightly higher tax rates, like Canada, because you know where the funds are coming from. But Obama keeps adding to our massive debt without coming up with a clear-cut public plan to address it.

He plans raise taxes on the wealthy, the very same population who most likely have the cash sitting around to invest in weatherization projects. Is he making Main Street-friendly moves like Cash for Caulkers now, so that he can reassure people that the government helped them out when tax hike time comes?