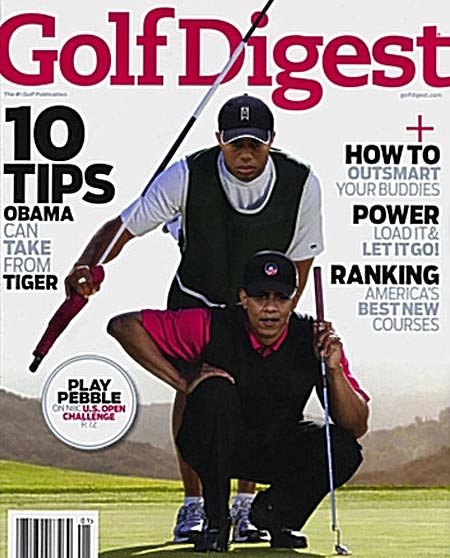 Tiger Woods has been yanked off primetime TV, but that hasn’t stopped the folks at Golf Digest to run an issue with Woods on the cover. The accompanying article? “10 Tips Obama Can Take from Tiger.”

OK, so it’s not exactly tasteful or relevant, but I think the editors did the right thing by leaving the cover intact. For one, doesn’t it tempt you to pick up a copy of Golf Digest, even if you don’t otherwise read the magazine? The outdatedness of the cover and article have already generated controversy, which could boost sales.

Secondly, the cover is kind of a collector’s item, given recent events. It’s like the last tabloid cover of Michael Jackson before his fatality. Or the newspaper front page of Obama’s inaugural speech. The very fact that it’s the last pure Woods cover gives it intrinsic value.

Finally, even after the Woods spectacle, Obama can learn from Tiger. He can learn about solidifying an image of integrity from pre-scandal Tiger, while post-scandal Tiger can teach him about what not to do if you want to keep that image intact. The article, if tweaked, could still be timely.

By keeping the cover, Golf Digest just made itself more edgy. That, I believe, will be a benefit.