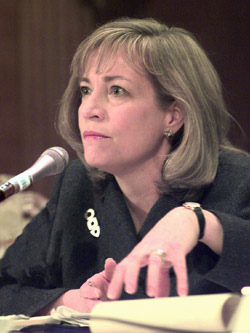 President-elect Barack Obama has selected a top management consultant to serve as the country’s chief performance officer, a post he said would help oversee reform of the federal government and its budget.

Sources said Obama has chosen Nancy Killefer, a director at McKinsey & Company and a former assistant secretary of the treasury in the Bill Clinton administration. Obama is expected to announce his choice this morning.

Donklephant’s Justin Gardner points out that Obama indicated he would do this in his campaign:

Barack Obama and Joe Biden will create a focused team within the White House that will work with agency leaders and the White House Office of Management and Budget (OMB) to improve results and outcomes for federal government programs while eliminating waste and inefficiency. This unit, a SWAT team, will be composed of top-performing and highly-trained government professionals and be headed by a new Chief Performance Officer (CPO) who will report directly to the president. The CPO will work with federal agencies to set tough performance targets and hold managers responsible for progress. The president will meet regularly with cabinet officers to review the progress their agencies are making toward meeting performance improvement targets.

Who is Nancy Killefer? According to Wikipedia, she:

-Comes from McKinsey & Co. and the US Department of Treasury, where she served as CFO and COO.
-Helped oversee and reform the IRS from 2000-2005 via the semi-public IRS Oversight Board.
-Was educated at MIT’s Sloan School of Business.

The Chief Performance Officer concept is used in large companies, where people in the position are tasked with managing–what else–corporate performance, regulatory compliance, business intelligence, and data governance.

It’s nice to see the government take an organizational hint from corporations. As for the federal budget…at least they’re trying something new.