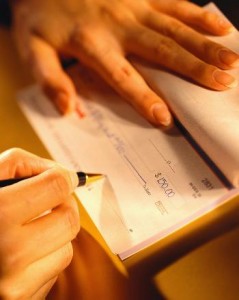 From the Chicago Journal of Consumer Research:

According to new research in the Journal of Consumer Research, simply asking people a question about whether they’re willing to volunteer their time leads to increases in donations of both time and money.

“Because time consumption is associated with emotional experiences, thinking about donating time reminds people of the happiness achieved through helping others,” write authors Wendy Liu (UCLA) and Jennifer Aaker (Stanford). They explain that the effect cannot be explained by guilt about not donating time, since people first asked to donate time agree to donate more money and more time than other groups.

How can people use the researchers’ finding for their own businesses? People generally don’t want to volunteer their time for businesses, or donate money to them. Businesses are for-profit, after all.

The trick is getting consumers to linger. Umpqua Bank uses that tactic with its retail banking store, which also has Wi-Fi and free coffee. Safeway uses it with in-store Starbucks, Jamba Juice, and Wi-Fi. Getting customers to use your business as a hangout spot increases the chances they’ll pick something up along the way.

The more challenging question is how businesses can use guilt as effectively as nonprofits. Any takers?