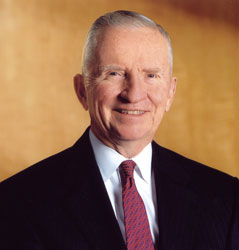 The Great Detroit Bailout of 2008 is nearing status as a done deal. Reuters covers the possible outcomes quite well. Coyote Blog and CFR have good reasons the bailout shouldn’t happen in the first place.

I’m not going to focus on the many reasons giving a drowned man a lifesaver is pointless, because there’s something much more interesting afoot: The Car Czar (from Reuters):

In addition to providing loans, the proposal would force automakers to answer to a presidentially appointed trustee — or “car czar” — and make the government their biggest shareholder. The overseer will have powers to shape a restructuring of the companies, withholding further loans if progress toward a turnaround stalled.

Supposedly, the government is eyeing former Fed chairman and Obama economic advisor Paul Volcker for the job. It’s a bad choice, not because Volcker isn’t qualified, but because the country needs his brainpower focused on its aggregate survival, not the dynamics of keeping the Big Three afloat.

We need Ross Perot. I know he’s 78 years old, but he has the verve of a man at least 20 years his junior. Here are 8 reasons Perot would make an ideal car czar:

1. He is the “Father of Fiscal Charts.” Have you seen perotcharts.com? The man could measure and graph Dick Cheney’s disappearances, if he felt like it. If given the position of Car Czar, he would immediately set about quantifying the big mess that is the Big Three, adding an element of transparency as well as employing armies of out-of-work analysts.

Spend a lot of time talking to customers face to face. You’d be amazed how many companies don’t listen to their customers.

3. He has experience as a czar. In the early 1980s, Perot reformed Texas’ drug laws and education system. For the latter, he devised systems that held principals and teachers accountable for student performance, which he in turn standardized using tests. That kind of systemization might not be ideal for human education, but it sure would work well in manufacturing.

SEE ALSO:
How Gold Can Help You Hedge Against Inflation

4. He exposes corruption. During the Regan years, Perot did not hesitate to privately investigate possible cover-ups around missing POWs in Southeast Asia. He publicly attacked the Department of Defense in the process. Perot isn’t afraid to play government watchdog, which is precisely what we need during times when the government requires transparency of everyone but itself.

5. He rallies for domestic jobs. Perot opposes NAFTA and outsourcing, but supports the Environmental Protection Agency (EPA), making him an ideal figurehead to rally for homegrown, green auto production.

6. He’s an activist. Consider this quote:

Perot’s notorious impatience will ensure the Big Three job gets done, fast. His popularity will keep eyes on himself and the industry. Heck, he may even make GMs worth buying again.

7. He’s a salesman. After restructuring the Big Three with the help of his many charts, Perot will know how to sell the revamped American automobile. He started his career as a star salesman for IBM; since then, he has politically sold himself as a popular Reform Party candidate, despite the challenges of doing so in a strongly bipartisan system.

8. He sat on GM’s board 24 years ago. At that time, he complained about the cars’ low quality. GM eventually bought up his shares, but Perot’s convictions remain. He has a bone to pick with the way GM operates. Perhaps it’s time to unleash him on the Big Three once again. (Hank Paulson makes any mention of “conflict of interest” here moot.)

Who better to be Detroit’s Car Czar than a ruthless, effective control freak like Perot? He knows how to run a business, he knows how to whistle-blow, and he has a keen eye for whipping people into shape. If the government is serious about not giving the Big Three more than the $15 billion it has already promised, it’s time to call the Perot hotline.