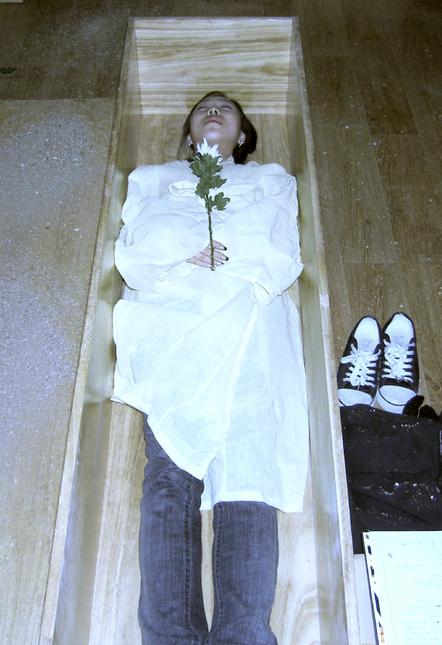 Suicide is a big problem in South Korea. According to the Financial Times, the compact peninsula has the highest rate of suicide in the developed world: 24.7 deaths per 100,000 people.

It’s become such a problem that employers are sending workers to “well-dying” courses to prevent suicides. During the courses, employees go through the arduous process of faking their own deaths.

Fake funeral training has become so popular that major companies like Samsung have built their own funeral training centers. Hyundai, another large employer, regularly sends employees to “well-dying” training.

Via the Financial Times:

South Korean companies are sending employees on ‘fake funeral’ courses to help prevent suicide. Participants sit at candlelit desks and are told to write their last will and testament. Attendees are prompted by questions such as: “If you died today, what would you tell your family”? Many of those in the room become emotional as they read out their wills.

Before they are “buried”, participants are asked to pose for their funeral portrait. Participants (then) enter a “death experience room” where they choose a coffin and put on a “death robe.” Course members get into their coffins and a flower is laid on each person’s chest. Funeral attendants place a lid on the coffin and dirt is thrown on the casket. Participants are left in the closed casket for five minutes and some start to cry in the darkness. Once the lids are opened the resurrected trainees are asked how they felt.

As someone who’s 99% ignorant of Korean culture, this strikes me as harsh. Is giving someone a reason not to die the same as giving them reason to live? Then again, it does seem to be working: Why else would Samsung have built a permanent funeral training center?