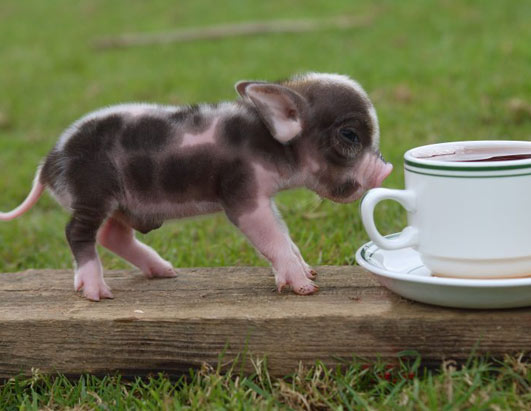 Teacup pigs are currently a raging new pet trend in Great Britain. Teacup pigs grow “about the size of a small spaniel,” and are this decade’s answer to the potbellly pig craze of yesteryear. MSNBC reports:

Their name comes from their size: At birth, the piglets weigh about 9 oz. and are the size of a teacup. At full growth at the age of two, they top out at 12 to 16 inches — about knee-high — and weigh a modest 65 pounds.

The piglets cost up to $1,100 each, and Croft sells them only in pairs and only to people she feels are qualified to keep them. In Great Britain, owners must be licensed to keep livestock, as the pigs are considered to be farm animals.

The pigs are also clean. “You can litter-train them like a cat. You can take them for walks,” Croft said. The mini-porkers also are said to be good for people who are allergic to dogs or cats, because they have hair instead of fur.

In the meantime, (breeder) Croft is putting in 14-hour days trying to keep up with the demand in Great Britain. She told Vieira and Curry she’s selling five to 10 a week, “but I got up this morning and I had over 500 inquiries on the Web site. So right now, there’s going to be a long waiting list.”

Teacup pigs, also known as micro pigs and micro mini pigs, are not yet sold in the US. It’s just a matter of time before breeders in this country pick up on the craze. At over $1,000/pig, the price is right. Wonder if they’ll make it into celebrity purses.