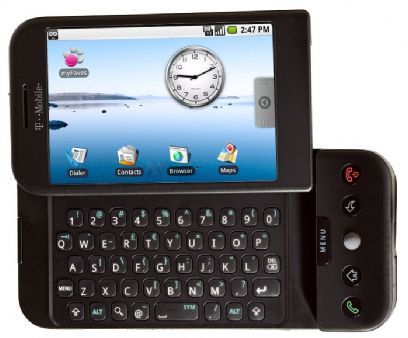 Yesterday, Google unveiled the much-anticipated G1 Smartphone, based on the company’s Linux-based Android platform. The phone, slated to compete with the iPhone and the Blackberry, will be released on October 22nd of this year, at a bargain price of $179.

It works on an operating system called Android, making it available for use on any telephone network. Right now, the T-Mobile has a deal with Google to provide the first G1s (or Android smartphones) through their network.

After unveiling the device yesterday, mobile phone fans are mixed on its promise. It lacks quite a few features that the iPhone offers, but it’s cheaper and will be available to different carriers (rather than just AT&T, which is locked in with the iPhone).

Android marketers also say that developers will take advantage of its Linux-based platform to add features and applications, making it a much more comprehensive device down the road.

In sum, Google has once again released a raw product while betting on further development to make it sparkle. Remember Chrome? It was a step up from the standard browser, but not ground-breaking. In a year or two, it may be.

Now, the T1 is being strategized the same way. Google’s wagering that the developer community will give its viable device the boost it needs to become spectacular.

Mobile guru Matthew Miller has a thorough preliminary review on ZNet. Here’s a partial list of his pros and cons (please read the whole thing if you’re a fan; he plans on coming up with a much more comprehensive review in the near future):

Has an integrated compass that improves Google Maps street view.

Runs on Linux, making it easy for developers to add applications (although so far, no developers have rushed their ideas to the Android platform).

Syncs well with Google applications, such as Gmail and Google calendar.

Supports POP and IMAP for email accounts. Audio player is integrated with YouTube and Google.

It also has some rather standard, but quality, features for upscale phones, including voice dialing and IM support.

It’s not for enterprise.

It doesn’t sync to Blackberry, Exchange, Outlook, or a PC. You can’t back apps up to a desktop.

Its multimedia capabilities are basic.

No movies, games are primitive, and you can only download songs from WiFi to the devices itself. It has no fancy features, such as VOIP or media playback.